Artists' books are works of art in their own right that have generally made the book the subject of an artistic concept; in contemporary art, these concepts also transcended the boundaries of the book as an object. Artist books are created as original work by the artist's hand or, based on the idea of ​​the multiple, also appear in authorized editions. 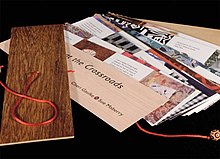 In the 1920s, artists from various art movements began to experiment with the book as a medium. The artist's book was anticipated, for example, by manifestos , pamphlets and publications by Dada (“Dada magazines”), by Kurt Schwitters , Raoul Hausmann or by the Bauhaus books. A feeling was developed for the fact that books are a communicative medium and that these can enable an escape from the firmly established regular places of art towards a broader public and the communicative networking of artists with one another.

In the 1960s, with the advent of conceptual art and Fluxus , first came - in addition to small boxes , limited edition objects and drawings - the shape of the international in small numbered edition printed artist books on. They reported actions, friendships and situations "which had the advantage of being able to be mailed in order to maintain the amicable communicative system." Fluxus' approach of being an art for everyone with the utopia showed how printed matter could be disseminated quickly ideas and strategies can be used.

Concept books, object books, collages , leporellos , scrolls , notebooks , loose-leaf collections , intermedia boxes or multiples made from a wide variety of materials are still produced today, both in small editions and as series products ; the traditional form of the book, consisting of printed pages between book covers, is varied by the artists or is often called into question.

The Mexican artist and writer Ulises Carrión defined “the new art of bookmaking” for the first time in an essay in 1975 . In several chapters he explains “what a book is”, going into more detail on the role of “prose and poetry”, “space”, “language”, “structures” and “reading”. He originally wrote the essay in Spanish (published in Plural No. 41 in Mexico City). It was published in English in 1975 in context No 6/7 in Amsterdam in a slightly abbreviated form. A German translation (by Hubert Kretschmer) was first in the Frankfurt art magazine skyscraper in October 1982 (issue 3/82) published . 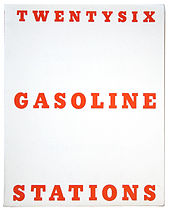 The field of artist books can roughly be divided into

Since artists' books often do not fit into the normal schema of academic libraries, i.e. they usually do not allow proper registration, some museums and libraries have specialized in collecting artistic books.

The best-known in Europe are the Gutenberg Museum in Mainz and the Archive for Small Press & Communication , which became the property of the Neues Museum Weserburg Bremen in 1999 . There are also collections of artists' books in the library of the Carl von Ossietzky University of Oldenburg , in the university library of the University of Applied Arts Vienna , in the State Gallery of Stuttgart , here in particular the Sohm archive, in the Brandenburg Art Collections in Cottbus in the Cottbus Art Museum, in the Bavarian State Library in Munich , in the Dresden State and University Library , in the University Library of the Bauhaus University Weimar and in the Museum for Art and Industry Hamburg . The Lyrik Kabinett Munich with the most extensive collection of poetry in the German-speaking area, the Archive Artist Publications in Munich and the German Literature Archive Marbach also have extensive collections of artist books. The Herzog August Bibliothek Wolfenbüttel and the Pablo Picasso Münster Art Museum , which specializes in French painter's books, have a larger collection of painter's books .

Extensive link collections on the subject of artist books