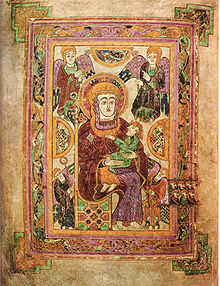 Mother of God with child

The Book of Kells ( Irish Leabhar Cheanannais ) is an illustrated manuscript from the eighth or ninth century. It is regarded as the pre-eminent example of island illumination and was declared World Documentary Heritage in 2011 .

There is disagreement about the origin of the Book of Kells. It was very likely made around the year 800 in Iona Monastery off the Scottish west coast and brought to Ireland for security reasons at the time of the Viking invasions . In 1006 it was stolen from Kells Abbey in Kells, County Meath , Ireland , but was found a few months later, but without the legendary golden cover, and remained in Kells until 1654. After it passed through various private hands, it has been owned by Trinity College in Dublin since the 17th century , where the original book can be viewed. Two sides of it are on display under a cabinet in the college library . Other interesting examples from the Book of Kells can be viewed as a facsimile in the library's museum.

The Book of Kells contains the four Gospels along with full-page illustrations of Christ , Mary with Child, and the Evangelists . The typeface is lavishly designed and decorated. In particular, the initials were partially executed with very fine patterns in bright colors. Instead of gold was Orpiment , an arsenic - sulfur - mineral used. The color blue is indigo - dye obtained from woad was extracted. Mixed with white , the result is light blue colors. White was made from plaster of paris. The assumption that blue was made through the use of lapis lazuli has been proven wrong by recent analyzes of the colors. Typical decorations are spiral and wickerwork patterns as well as ornamental human and animal motifs. These patterns are traditional Celtic patterns .