The Fridolinsvita is a biography of the Irish messenger of faith Fridolin von Säckingen , which was written down in the 10th century by a monk named Balther in the Säckingen monastery . 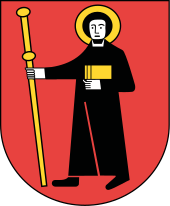 Coat of arms of the canton of Glarus with St. Fridolin

As a basis for Balther's work, the author is said to have used a manuscript with the biography of Saint Fridolin , which he discovered on his wandering through France in the Helera Monastery (today Ediger-Eller on the Moselle), also founded by Fridolin . Such a biography is said to have existed in Säckingen as well, but was lost at the time of the Hungarian invasions . Since Balther, according to tradition, had no way of copying it, Balther is said to have learned it by heart and later rewritten it in Säckingen .

In addition to Balther's vita, there are references to Fridolin in Petrus Damiani's sermo .

“The legend of St. Fridolin was recorded by a servant of the Säckingen monastery, Balther , who dedicated it to his former teacher Notker (probably Physikus † 975) in St. Gallen . The historicity of this Balther can no longer be doubted today; the time of writing would be about the second half of the 10th century. "

The historical value of the Fridolinsvita left by Balther was questioned by the Baden Historical Commission :

The consecration of Hilary of Poitiers, 14th century manuscript

“Balther refers to sources and for the first major part of the legend to a vita that he found on his hikes in the Helera monastery, for the second part, which is filled with miracles, to the local tradition of Säckingen. That vita was about a St. Fridold traded, whose identity with Fridolin was assured by the fact that the founding of Helera and Säckingen was ascribed to him. Säckingen also had such a vita of St. Fridolin and St. Hilarius possessed, but both of his perished in a Huns invasion . "

- Joseph Sauer: The Beginnings of Christianity and the Church in Baden , Baden Historical Commission, 1911, p. 33.

Balther explains that he “did not get the handwriting [in Helera] on loan”, “nor can he find any parchment or ink in Helera. So he learns the text by heart and writes it down at home, if not literally, then true to the meaning, only in rural expression. "

The criticism of the Historical Commission of the truthfulness relates in particular to the reference to the first Frankish king Clovis I , because "Fridolin's effectiveness in Poitiers [...] had to be set before the year 507, in order to have time for later events at a time when Poitiers was still Visigothic and Arian, so Clovis could not exert any further influence on the situation there. […] Even more incomprehensible, however, is Clovis's disposition over the still unknown Rhine island of Alamannia. Here the Frankish king would have disposed of an area that was Burgundian, if not Ostrogothic property, that is, an act that would inevitably have led to serious conflicts with his neighbors, if not even with his powerful brother-in-law Theodoric . "(Sauer, 33).

One recognizes “the endeavor to prove that the old Alemannic monastery was as early and powerful as possible. The Säckingen monastery is mentioned for the first time in 878 in a document from Charles III. as a royal monastery. It made sense to attribute this character to a royal foundation and to date it as far back as possible. [...] The fact that its foundation extends beyond the Carolingian era , probably into the 7th century, results, as Schulte has emphasized in his critical investigation, from his closed, nowhere of the possessions of the St Gall monastery enforced property. But we cannot go back to the time of Clovis I. "

But this also calls into question the founding role of Fridolin, especially since “his veneration begins relatively late; before the 9th century we have no evidence. So he no longer belongs to the group of Merovingian saints ( Martin , Hilarius , Remigius , Germanus, etc.) whose cult marks the oldest advance of Christianity into pagan Germany. But even Säckingen did not give him the absolute cult in the early days, which the founders of the original monasteries like St. Gallus , Trudpert and others enjoy. The main veneration in Säckingen is St. Hilary and St. Cross ; Only in the high Middle Ages, from around the 13th century, did Fridolin appear to be on a par with the Saint of Poitiers, as in the seal of the city of Säckingen. Now Fridolin had become popular and numerous churches in southern Baden, in Breisgau and especially in the canton of Glarus receive him as patronus, but primarily in places where Säckingen was wealthy. "

The Fridolin tradition in Helera with the “tradition of Poitiers [...] which originated in the 6th century at the latest [..., shows] another user of the same in the 11th century, Petrus Damiani , who gave a sermon in Poitiers around 1060 on the translation of the relics of St. Hilarius stopped. In it he summarizes the effectiveness of St. Fredelinus, the abbot of the Hilarius monastery in Poitiers, the visions he had there and his eventual calling to the island of Gallinaria. ”(Sauer, 34).

The commission emphasizes that "one should hardly infer two different personalities", especially since "Damiani expressly assures that he did not follow a written source that was missing in Poitiers, but the oral tradition there."

“If we peel the historical core out of the legendary overgrowth, then in Fridolin we at least have a historically secure personality, one of the Irish missionaries who must have made the promotion and spread of the Hilarius cult a special task, and certainly in Merovingian Time. [...] Whether Fridolin brought him [the Hilarius cult to Säckingen] remains to be seen; the tradition which that of Poitiers ascribes to it may make it seem possible. But it is just as easy to attribute the foundation in Säckingen to the abbot in Poitiers, who is known as the main patron of the Hilarius cult, for example after relics had been received from him. "

- J. Sauer: The beginnings of Christianity and the church in Baden , Baden Historical Commission, 1911, p. 35.

“Because besides relics of St. Hilarius had it [the Säckingen Monastery] also a particle from St. Cross , apparently from the great relic that came to Poitiers in 569. "

Modern knowledge of the chronology of the Merovingian kings allows the conclusion that it was only under Chlothar II (584–629) that Säckingen or its foundation as a royal monastery could have come about.

Balther's Fridolin Vita does not intend to fix Fridolin life historically, but rather represents, according to Oeschger, "a description of a sacred example in the sense of edification and an example".

The original of the Fridolinsvita no longer exists. Nevertheless, copies of it were made as early as the early Middle Ages, seven of which have survived to this day.

The oldest of these copies is known under the Karlsruhe Codex HS 429. There is also a copy in the Zurich City Archives today, extracts of which are derived from the Fridolinsvita and were probably made between the 11th and 12th centuries. A German copy, made by Johannes Gerster 1431/32 (541 pages), a citizen in Säckingen, located in the Abbey Library of St. Gallen of the monastery of St. Gall (Codex 598).

Even before the Fridolinsvita was printed in Latin at the end of the 15th century, prints were made in 1480 by the Ulm printer Johann Zainer based on the German translation by Johannes Gerster , of which three copies are in Karlsruhe, St. Gallen and in the Bern City Library have received.