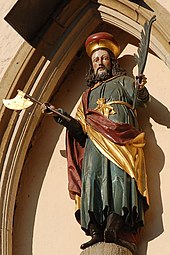 Trudpert was an Irish missionary in Breisgau , he is said to have received around 650 (after the very poor news) from a Count Othbert in a valley of the Neumagen river a piece of land for a spiritual foundation. He founded a branch in this place and built a chapel. But he was only able to preach the gospel for three years , then he was killed by two servants with an ax. That is why he was venerated as a saint. The Benedictine monastery St. Trudpert in Münstertal / Black Forest goes back to him . Remembrance day is April 26th.

Trudpert is the missionary of the Black Forest under the saints Fridolin , Pirminius , Gallus , Othmar , Columban von Luxeuil and Landolin , who were active around the Black Forest. According to tradition, he had a brother, St. Rupert , who also worked as a missionary, but this is controversial, Martin Gerbert (1720–1793) writes in detail in his work "History of the Black Forest". According to a manuscript from St. Peter zu Salzburg, they had then published by Heinrich Canisius , another sister or niece named Erindrudis.