The lectionary ( lat. [Liber] lectionárius , also lectionárium , "reading book", from léctio , "reading") is a liturgical book that contains the biblical readings during the church year for recitation during worship . Originally it was read directly from the Bible; It was not until the 5th century that the pericopes , which were arranged according to the church year, were collected in specially designed books. In the Greek language, more than 2,400 manuscripts known as “Lectionary” (ἐκλογάδιον eklogádion ) have survived .

The German-speaking mass lecture (title: The celebration of the Holy Mass - Lectionary ) of the Roman Catholic Church contains the Old Testament and all New Testament pericopes (including the Gospels ) as well as the "intermediate chants" for the celebration of Holy Mass in the Roman rite . These texts are no longer printed in today's “ missal ”, which contains the celebrant's prayers. The formerly independent evangelist with the gospel pericopes and the epistolar with the biblical reading pieces outside of the gospels have been absorbed in the lectionary .

The measurement lesson consists of several volumes for the Sundays and Holidays in the three reading years A, B and C, for the working days of the time in the annual cycle , for the marked times and for various occasions. The reading regulations for Sundays and holidays with three reading years are taken into account in three volumes. The lectionary for the days of the week and the feast days of the Saints is divided into two volumes for 17 weeks each; the reading texts for the days of the week planned for two consecutive annual reading series are given in both volumes for the day of the week (year I / year II). An excerpt from the Mass lesson published for ceremonial purposes is today's gospel book with the scriptures readings from the four gospels of the New Testament.

With the reading year beginning on the first Advent in 2018, new lectionaries with the text of the revised standard translation will be gradually introduced until 2022 .

The lectionary according to the order of worship texts and songs is published by the United Evangelical Lutheran Church in Germany (VELKD) and the Union of Evangelical Churches (UEK). It contains the texts of all readings and sermon texts for all Sundays, feast days and memorial days of the church year. From the 1st Advent 2018 this lectionary will replace the previous various lectionaries of the Protestant regional churches in Germany and Austria as part of the revised pericope order.

In the Old Catholic Churches , the measurement lesson of the Roman Catholic Church is usually used. In addition, there are "own texts" for individual Sundays and holidays, which are combined in a collection. 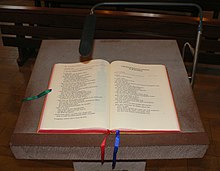 The current edition of the open volume 3 for reading year C on an ambo.

Lectionary of the Protestant Churches