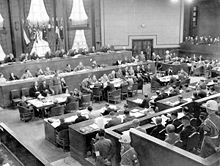 The hearing before the deciding court is the core of the judicial process . In a procedure which runs according to fixed rules ( procedural law ) with the presence and participation of the litigants and / or their authorized representatives as well as other participants ( witnesses , experts , etc.), the prerequisites for the final decision of the court are created through the presentation and the discussion of the litigation material .

The judicial process is focused on the trial. Only that which was the subject of the negotiation is to be used in the decision. The parties' written submissions prior to the negotiation serve only to prepare them. Motions of fact and motions to take evidence ( motions for evidence ) must be made expressly during the hearing even if they have been announced beforehand.

The right to hold an oral hearing is waived. In this case, the decision will be made in writing. This is based on the fact that Article 6, Paragraph 1, Sentence 1 of the ECHR only stipulates that the parties to the proceedings can request an oral hearing. However, if the parties voluntarily renounce such an oral hearing, this is at their disposal .

In the case of a proper summons to the contested hearing , civil proceedings may also be negotiated in the absence of a litigant or their authorized representative and a decision may be made by default .

Importance of the trial

The right to be able to express oneself before the court on one's own matters within the framework of a hearing is also one of the human rights . Article 6 (1) sentence 1 ECHR reads:

“Everyone has the right to have any disputes relating to their civil claims and obligations or any criminal charge against them brought to fair, public and reasonable time by an independent and impartial court based on law. "

The basic procedural maxims of the public , oral and direct communication apply to judicial negotiations .

The entire negotiation, not just the announcement of the decision, must generally take place with the participation of the public ( Section 169 sentence 1 GVG ). This is intended to ensure public scrutiny of judicial activity and prevent secret and arbitrary procedures. Exception: exclusion of the public, for example to protect young people, in the overriding interest of those involved (e.g. disciplinary proceedings ). Public means the personal presence of listeners, press representatives and other uninvolved persons. Television, radio and film recordings for the purpose of public presentation or publication of their content are therefore not permitted in principle, but can be permitted under the conditions specified in Section 169 GVG.

Oral presentations and discussions take place before the court. The oral discussion can be replaced by a written procedure, depending on the procedural rules.

The negotiation takes place in direct, direct contact between the court and the litigants and those involved in the proceedings at a location specified by the court (this does not have to be the seat of the court) or with the help of direct visual contact through technical aids (connection to an electronic conference). A mere telephone negotiation ( conference call ) is not sufficient.

At the beginning, when witnesses and experts are sworn in and when the verdict is pronounced during a court hearing, all participants rise from their seats worldwide (in Turkey only when witnesses are sworn in and when the sentence is pronounced). This is done out of courtesy and respect for the court. For court sessions in criminal and fine proceedings under the German Courts Constitution Act , a guideline recommends:

“When the court enters the court at the beginning of the session, when witnesses and experts are sworn in and when the sentence is pronounced, all those present rise from their seats. In addition, everyone involved in the process is free to decide whether to stay seated or stand up while making statements and during interrogations. "

- No. 124, paragraph 2, sentence 2 of the guidelines for criminal proceedings and administrative fines .

Getting up after short breaks in negotiations cannot be required.

In March 2012 the Federal Constitutional Court rejected the constitutional complaint from a member of the Hells Angels Motorcycle Club . This had complained against it that motorcycle vests (" Kutten ") with the label "Hells Angels" were banned during a court hearing.

The metal cages in the courtroom, which were still used in Russia or Ukraine in spring 2019, did not meet the international standards for safeguarding the dignity of a defendant.