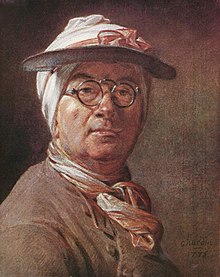 Jean Siméon Chardin (born November 2, 1699 in Paris ; † December 6, 1779 there ), erroneously called Jean-Baptiste-Siméon Chardin during his lifetime , was the great individualist among the French painters of the 18th century. He achieved fame through his still lifes and genre paintings , which are characterized by extraordinary clarity and modesty. He never went abroad to be inspired by ancient works. The perfection of the composition and the harmony of colors and shades were more important to him than the choice of subject. 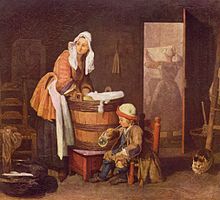 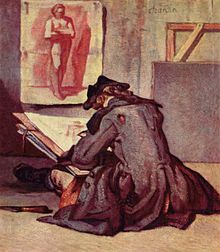 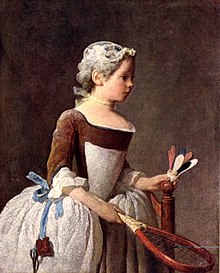 The Girl with a Shuttlecock , 1741, Uffizi Gallery, Florence 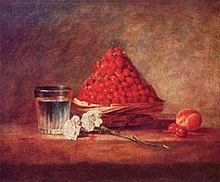 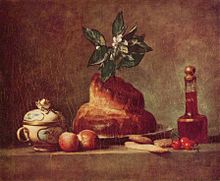 Chardin was born in the bohemian district of Saint-Germain-des-Prés . His father was a master carpenter who u. a. Made billiard tables for the king. Jean was his eldest son, who was supposed to take over the business and therefore received a technical training. But his talent for painting showed up early on. His father sent him to the studio of Pierre-Jacques Cazes (1676–1754) in 1718 . The teaching methods there were not very creative: there were no models and one task that was always the same: copying stitches . He continued his artistic training with Noël-Nicolas Coypel . Coypel aroused Chardin interest in still lifes, which he himself created in large numbers from 1720 onwards. Despite his apprenticeship with Cazes and Coypel, Chardin remained largely self-taught .

Four years later (1724) he became a master in the St. Luke guild, probably at the instigation of his father. In the same year, Chardin met Marguerite Saintard at a dance event . The marriage contract was drawn up on May 6, 1724, but the marriage was postponed due to Chardin's uncertain financial situation. He tried to improve this by painting in details in works by well-known artists. He also started exhibiting his works at the Exposition de la Jeunesse . This exhibition, which took place on Place Dauphine , promoted young artists. In 1728 he exhibited several works. Among them was the kitchen still life with rays , which impressed Nicolas de Largillière . He then suggested to Chardin to exhibit his pictures in the Académie Royale . Chardin did not trust the unexpected honor and put the academy superiors to the test by hanging his pictures in an inconspicuous place in one of the smaller rooms. Largillière noticed them again, but he took them to be the work of a Flemish painter. After Chardin identified himself as the painter of those works, Largillière urged him to apply to the academy. In September he was accepted into the Académie Royale as a painter of flowers, fruits and genre scenes.

In 1731 he was finally able to marry Marguerite Saintard in the church of Saint-Sulpice . The old marriage contract was replaced by a new one. According to this, there was only a meager dowry for the couple . So Chardin had to look for other sources of income, which he then found through Jean-Baptiste van Loo . Van Loo asked Chardin to help restore the works of Francesco Primaticcio in Fontainebleau . Chardin and his wife settled in three rooms in his family home on Rue Princess . His studio stayed under the roof. The family happiness is clearly expressed in the genre scenes. Surely his wife and children Jean-Pierre and Maguerite-Agnès often sat as models for him. Fortune lasted until his wife died in 1735.

There is still no satisfactory explanation for Chardin's change in style. Allegedly, a sarcastic remark by the portrait painter Jacques-André-Joseph Camelot Aved , with whom Chardin shared a studio, is to blame. After Aved turned down an order for 400 livres, Chardin asked him to reconsider his decision because it was a lot of money after all. “That might be true if a portrait were as easy to make as a sausage,” replied Aved, alluding to the subject in Chardin's last work, which apparently had consequences. Shortly thereafter, Chardin turned to figure painting, creating cozy kitchen scenes and dignified interiors. These works made him very popular. In order to reach an even larger audience, he had them engraved in copper.

In addition to the bourgeoisie, the nobility were also clients for Chardin's works. So Louis XV. After meeting him in 1740, she became very interested in his art, as did the Swedish princess Luise Ulrike , who commissioned two pictures for Drottningholm Palace after she noticed him through pictures in the Swedish embassy. Like many others, the princess had to wait a long time (one year) for the pictures. Chardin annoyed many clients with his very slow way of working, which many critics described as laziness. As a result, of course, he often had less income than expected. His financial situation eased through his marriage to the 37-year-old childless widow Marguerite Pouget . At the same time his reputation at court and public recognition increased. In 1743 he received the rank of Conseiller of the Academy. A few years later he was responsible for hanging exhibits. In 1752 the king set his pension at 500 livres, in 1755 he became treasurer of the academy and in 1757 he got a residence in the Louvre . Now his recognition as a painter at court was finally completed. He owed many of the royal privileges to Charles-Nicolas Cochin , the son of his engraver, who was the academy's secretary. His good relations with the brother of Madame de Pompadour , the Marquis de Marigny , brought Chardin a higher pension and other commissions (e.g. the decoration of Choisy Castle and Bellevue Castle ). Chardin was now financially secure.

There were arguments in the family for this. Chardin's son Jean-Pierre was supposed to become a history painter, but he lacked the talent for this. Shortly before leaving for the Académie de France à Rome , there was a scandal with Chardin. Jean-Pierre wanted to fight for his mother's money, which he would be entitled to when he came of age. But Chardin was of the opinion that this money should be used to pay for Jean-Pierre's training. He got his son to sign a waiver, but the latter revoked it, claiming that he had been forced to do so. Jean-Pierre was now taking legal action against his father. But even this drastic measure did not bring a winner. It is not known whether the two were reconciled afterwards. On the way back from Rome Jean-Pierre was kidnapped by pirates. His further fate remains in the dark.

In old age it became uncomfortable for Chardin: Gallstones caused him constant pain and his eyesight deteriorated, which is why he began to paint pastel . From 1770 his opponents took over important positions that had previously been held by his patrons. So he got only a few public contracts, fewer pensions, and the favor of the court also decreased. Despite some recent successes, interest in Chardin's art had waned.

Chardin is one of the most extraordinary artists of his time - and this in several ways. He never felt it was important to study ancient and high renaissance art. This is probably why he never left Paris. In addition, he was the only artist of his era who remained without training in the academy - even if he later regretted this. Yet something else made him the unique artist he was. Chardin recognized that art can also be based on everyday occurrences; it does not require any intellectual creation or mythological underpinning. This is particularly evident in his still lifes , which are clearly influenced by Flemish painting, but very different from it. Chardin chose his subjects according to their shape, texture and color, but not according to their symbolic content.

He has been painting still lifes again for the past twenty years. Critics said he had exhausted his imagination. But Chardin was looking for the perfecting of technology and not always for new objects. Chardin preferred to paint directly on canvas. This was easier for him because then he had the object in front of his eyes. With this way of painting, it is not surprising that he did not make any sketches. He painted slowly and meticulously, each of his pictures was the result of days of deliberation. At this speed he could manage a maximum of two pictures a month.

His still lifes are classic natures mortes , whereby he strictly and carefully at the same time paid attention to the inner balance of the composition and neglected insignificant details. Apart from a few large-format paintings with well-stocked buffets, he does not present hunting booty as trophies in a baroque, lavish manner: animals (rabbits, poultry, etc.) are presented to the viewer in an almost devout way, especially in the quiet hour before they are prepared in the kitchen become. Chardin's pictures show the simple things of everyday life and appear undramatic but serious. In his genre pictures , too , he depicted very everyday processes: children sunk into play, kitchen and laundry scenes, etc. Many of his pictures are of harmonious perfection and unadulterated simplicity. In addition, there is its unmistakable, unobtrusive coloring: in mild light, a floating balance is created between soft nuances and sensual blossoming.

The primer for his pictures consisted of a thin layer of oil paint, a mixture of white lead and reddish brown. This created a dark background. Then he applied dark tones, then half tones and finally the light tones. Once he had found the right tone harmony, he added the colors. And here, too, he created a balance between light and dark points. He brought objects together through color. Due to his careful execution, Chardin achieved a pleasing and natural effect. When the picture was finished, he painted over it again with the same colors. This technique led Diderot to refer to Chardin as the first colorist in painting.

In the middle of the 19th century there was a renaissance of Chardin's work, spurred on by the Goncourt brothers and later by Marcel Proust , who wrote: “From Chardin we learned that a pear is as alive as a woman, that an ordinary clay jug is so beautiful is like a gem. "