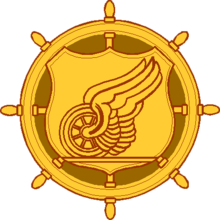 It is responsible for port terminals, railways and trucks, as well as for landing at sea, road traffic controls, rail transport and transport planning.

In Fort Story is responsible for the training and the training of Logistics Over The Shore (LOTS) tasks, and salt water treatment. In Fort Leonard Wood that finds Motor Transportation Operator Training held for the Corps.

It is the successor to the Army Transport Service (ATS) and the Harbor Boat Service (HBS). On June 28, 1950, Harry S. Truman decided that the Corps should become a division of the Army and on July 31, 1986 it was incorporated into the US Army Regimental System .

From 1942 to 1947, the USATC's railway division was subdivided into Military Railway Service (MRS). The 1st MRS was responsible for North Africa, Italy and southern France. The 2nd MRS for all other European areas.

For example , the Transportation Corps operated hospital ships , troop carriers, and tankers . After the war, the majority of all ships went to the United States Navy .

The Transportation Corps operated depots for air freight. It had several helicopter companies . B. were involved in the transport of wounded in the Korean War and the Vietnam War .

Allied train through the Persian Corridor

From April 1943 to May 1945, transports of 5 million tons across the Persian Corridor were organized for the benefit of the Red Army within the framework of the lending and leasing laws . The Iranian State Railway, completed in 1939, played an important role here. The transports began in the port of Bandar Shahpur (today Bandar-e Imam Chomeini ) and Bushehr in the Persian Gulf and led via Tehran to the Caspian Sea . There were other ports in Iran and Iraq at Basra and Umm Qasr .

During Operation Overlord , troop carriers and amphibious vehicles like the DUKW were driven by the USATC to unload the freighters.