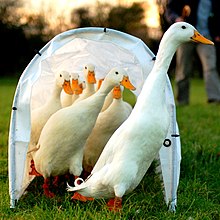 In general, based on a thesis by Bruno Dürigen , it is assumed that the domestication of the mallard in different areas at different times resulted in two different types of domestic duck.

In Europe, and probably also in China, so-called " land ducks " emerged. Land ducks are heavier than mallards. Their outward appearance is still similar to the mallard.

In Southeast Asia, however, ducks with a steep posture developed, which are known as penguin ducks or Bali ducks. According to Watanabe , they were still kept for egg production in various countries in Southeast Asia in the 1970s and are considered the starting breed for all other " penguin ducks ".

In addition, the wart duck from South America , a cultivated form of the musk duck ( Cairina moschata ), is kept as a livestock . Warty ducks are traded as flight ducks . The name Barbarie ducks comes from France . Their meat is valued for its lower fat content.

The so-called mulard ducks are hybrids of the two cultivated forms Peking duck and wart duck.

Distribution and use of domestic ducks

The domestic duck is common worldwide. While in Europe duck keeping is of third-tier importance compared to keeping chickens and goose, domestic duck is an important domestic fowl in terms of nutrition, especially in East and Southeast Asia, but also in Latin America and some African countries. In China alone there are around 500 million House ducks kept.

Domestic ducks are kept as fattening animals mainly because of their meat . Duck eggs were considered a delicacy in Europe, but are rarely offered today due to the increased risk of salmonella infestation. Duck feathers and down are used to fill pillows, blankets or clothing, but also to make shuttlecocks and were also used to reinforce the string of the repeating crossbow. Private owners also use ducks as grazing animals and eaters of snails and insect pests.

In fattening farms (rapid fattening), ducklings are kept in rearing stalls for 21 days (rearing phase) and then fattened for 25–29 days (fattening period). At around 12 weeks, the ducks are slaughtered before the first moult with a weight of 2,000 to 3,000 grams. Young ducks, or young Peking ducks, are slaughtered after two to three months and weigh around 1,500 grams to 2,000 grams. They are sexually mature after six months and weigh up to 3,000 grams.

Like geese, ducks can be used to make foie gras ( foie gras ). This is done using a certain type of fattening, the pasta or plug, in which the animals are given several kilograms of mash daily through a pipe in the last few weeks before slaughter. Although foie gras is much better known, 96% of foie gras are actually duck livers; 98% of the processing takes place in France.