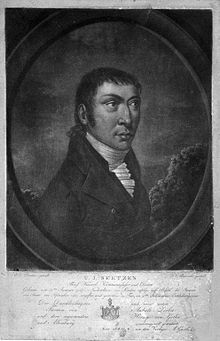 Ulrich Jasper Seetzen (born January 30, 1767 in Sophiengroden , parish Middoge , in the rule of Jever ; † in September / October 1811 near Taizz in Yemen ) was a German doctor , scientist , naturalist , traveler and orientalist .

Ulrich Jasper Seetzen was born in Sophiengroden, parish of Middoge, in the Jever rule as the second son of the wealthy farmer Ulrich Jasper Seetzen and his wife Trienke, née. Otten, born. He attended the Mariengymnasium Jever and went in the fall of 1785 at the Georg-August University of Göttingen to medicine to study. In addition, he devoted himself to the natural sciences, in which Johann Friedrich Blumenbach was his teacher, as well as technology. At the University of Göttingen, where, as one of the centers of comparative natural sciences and geography, all news about research trips were collected and evaluated, Seetzen received the first impetus for his later travel plans primarily from Carsten Niebuhr and his reports on his Orient expedition of 1763.

In 1789 he gained through the dissertation Systematum de morbis plantarum brevis dijudicatio the doctorate . Together with several young people, including Alexander von Humboldt , he founded the Götting physical society . As a wealthy man he was able to lead the life of a private scholar and devote himself entirely to his scientific interests.

In 1790 he undertook a six-month trip through Westphalia and West Germany, collecting plants and minerals and visiting factories and mines. In 1791 he went to Vienna , later to Bohemia , Holland and Saxony and in 1792 returned to his home town of Jever .

In 1794 he bought a windsaw mill and a shell limestone distillery there, founded a building materials trade, acquired extensive property and tried to reforest heath lands . He continued to publish in zoological, botanical and technical journals. In 1795 he was appointed a member of the natural research society in Berlin and Jena . Later he worked on the estate of the Count of Münster-Meinhövel in East and West Prussia.

From 1800 Seetzen worked out a plan for a multi-year research trip, during which he first wanted to explore Asia Minor and the Arabian Peninsula and then attempt to cross Africa from east to west. He completed a crash course in astronomy at the Gotha observatory in order to be able to make exact maps, and gained the support of Duke Emil Leopold August von Sachsen-Gotha-Altenburg , who commissioned him with the purchase of oriental antiques, printed works and natural objects.

After he had been accepted into the Masonic lodge Zum Silber Schlüssel in Jever on March 2, 1802 , he set off on his journey on June 13, 1802. In the summer of 1802 Seetzen first traveled to Constantinople via Vienna and Hungary and stayed in Smyrna and Aleppo in 1803/04 , where he learned Arabic . From here he traveled from 1805 to 1807 through Syria and Palestine , to Jerusalem , to the Dead Sea and to Sinai . From 1807 to 1809 he stayed in Cairo to prepare to explore the Arabian Peninsula, converting pro forma to Islam .

In 1809 he visited Mecca and Medina , in March 1810 Yemen , from there Aden and Mocha and then wanted to try his crossing of Africa. His last known letters are from November 1810. Seetzen probably died in September / October 1811 near Taizz near Sanaa .

Encouraged by the news of trips by his former fellow students Alexander von Humboldt to South America and Friedrich Konrad Hornemann to Africa , Seetzen decided in 1802 to undertake his own research trips to the Middle East, to Arabia and Africa. Seetzen used his own fortune for this, but also received funding from the Duchess of Anhalt-Zerbst and the Duke of Saxe-Gotha-Altenburg.

Disguised as a pilgrim , he came to Cairo and Mecca and was able to draw up a detailed plan of the Kaaba there in 1809 . His knowledge of medicine, command of the Arabic language and the observance of the commandments of the Koran gave him access to the Arab world. He collected art objects, such as sculptures and mummies , as well as numerous writings that he sent to his sponsor, the Duke of Saxe-Gotha-Altenburg. Much of it is still preserved today in the Gotha Research Library .

Seetzen's diaries and his Arabic vocabulary lists are still an important source of Arabic studies today . He is one of the most important German orientalists . Friedrich Karl Hermann Kruse and Heinrich Leberecht Fleischer (Berlin 1854–59, 4 vols.) Published his diary with commentary.

Seetzen is considered to have rediscovered the city of Gadara on the Sea of ​​Galilee.