Fairfield County is a county in the state of Connecticut in the United States . It is located in the southwest of the state and had 916,829 inhabitants (Census 2010) with a population density of 565.6 inhabitants per square kilometer. The area of ​​the county covers 2168 square kilometers, of which 547 square kilometers is water. The largest city is Bridgeport , it is also the traditional administrative center. However, in Connecticut all local administrative functions have been transferred to the communities.

Fairfield County was one of the four founding counties in 1666.

As of the 2000 census , the county had a population of 882,567. There were 324,232 households and 228,259 families. The population density was 545 inhabitants per square kilometer. The racial the population was composed of 79.31 percent white, 10.01 percent African American, 0.20 percent Native American, 3.25 percent Asian, 0.04 percent of residents from the Pacific island area and 4.70 percent from other ethnic groups Groups; Hispanic or Latino of any race were 11.88 percent of the total population. 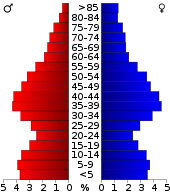 Counties in the US state of Connecticut