Lake Erie in winter (near Cleveland)

The Lake Erie ( English Lake Erie , English pronunciation [ˌleɪk ɪɹi] ; French Lac Érié ) is the southernmost and fourth largest of the five Great Lakes of North America . The border between the United States and Canada runs through it . The Detroit River forms the inflow . It drains into Lake Ontario via the 56 km long Niagara River . The Erie Canal connects the lake with the Hudson River, 580 kilometers to the east . The name is derived from the Erie Indians .

The main tributary of Lake Erie is the Detroit River, which comes from Lake Huron and Lake St. Clair . Other significant tributaries are the Grand River (Lake Erie, Ohio) , Grand River (Lake Erie, Ontario) , Huron River (Lake Erie, Michigan) , Huron River (Ohio) , Maumee River , Sandusky River, and Cuyahoga River . It is connected to Lake Ontario via the Niagara River with Niagara Falls . There is a shipping connection via the Welland Canal , which is part of the St. Lawrence Seaway . The Erie Canal was a historic shipping connection to the Hudson River , which was initially of great economic importance in the 19th century and whose commercial use was then abandoned in the second half of the 20th century.

Lake Erie forms part of the border between Canada and the United States . In the north is the Canadian province of Ontario , in the south the US states of Ohio , Pennsylvania and New York . The cities of Buffalo , Erie , Toledo and Cleveland are on the lakefront . There are a total of 27 islands in the lake, nine of which belong to Ontario and the rest to Ohio. Middle Island is the southernmost point of Canada, while Point Pelee National Park , located on a peninsula, is the southernmost point of mainland Canada. With an area of ​​42 km², Pelee Island on the Canadian side is the largest island on Lake Erie.

Viticulture has been practiced on Lake Erie since the 19th century. The Canadian cultivation areas extend on the north shore and on Pelee Island. The Lake Erie AVA wine region is located in the American state of New York .

As the setting for the ballad John Maynard by Theodor Fontane about a shipwreck of the Erie on Lake Erie in 1841, it entered German literature. 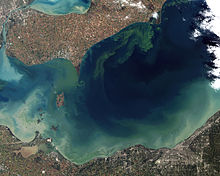 Algae bloom in 2011 in the western half of Lake Erie

Lake Erie is the one of the Great Lakes that suffers most from pollution and environmental problems. Its condition was particularly bad in the 1950s and 1960s, when industrial and household wastewater was discharged largely untreated into it and its tributaries. The lake was heavily polluted with polychlorinated biphenyls (PCB) and mercury, among other things . The widespread use of detergents containing phosphates led to severe eutrophication of the lake at this time , which led to regular algal blooms . The overall condition of Lake Erie was so poor that many of its animal populations were on the verge of total collapse in the late 1960s and it was eventually nicknamed North America's Dead Sea in the media . The situation of the Eriesse and its tributaries like the Cuyahoga River became a catalyst of the environmental movement in the USA and in the 1970s a number of measures were taken to rehabilitate the lake. In 1972 the Clean Water Act was passed, the Great Lakes Water Quality Agreement was signed and the United States Environmental Protection Agency (EPA) was founded. Sewage treatment plants were built and phosphate was banned as a component of detergents and the use of PCBs. This led to a drastic decline in algal blooms. The animal populations began to recover and by the 1980s the condition of Lake Erie had improved significantly. He again became a popular excursion and leisure destination, especially for anglers and now had the nickname Walleye capital of the world ( Walleye -Hauptstadt the world) with an estimated population of 40 million glass eyes perch.

In the mid-1990s, the algal bloom returned, this time caused by increased fertilization in the agricultural regions in the catchment area of ​​the lake. The fertilizer, including phosphate-containing components, is washed either directly into the lake or into its tributaries by rain. In the 21st century, the flowers of the poisonous Microcystis bacteria became increasingly larger and thus also put the drinking water removed from the lake at risk. 2011 saw the largest algal bloom in the history of the lake; it took up a fifth of its surface. In the summer of 2014, a large microcystis flower poisoned drinking water in Toledo, leaving 400,000 people unable to use tap water for several days.