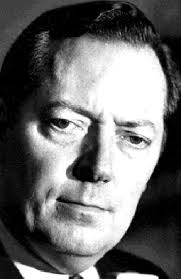 James Carothers "Jim" Garrison (born November 20, 1921 as Earling Carothers Garrison in Denison , Iowa , † October 21, 1992 in New Orleans , Louisiana ) was district attorney for New Orleans from 1962 to 1973. He was world-famous for his investigations in Connection with the assassination attempt on John F. Kennedy . His investigations are the subject and content of the film JFK - Tatort Dallas by Oliver Stone .

Jim Garrison, grew up in a family lawyer, entered with 19 years in the US Army and became a pilot trained and participated in World War II on reconnaissance in part on the European theater of war. After the war he joined the National Guard , studied law at Tulane University in New Orleans. From 1949 to 1951 he was in Seattle and Tacoma with the FBI . He then returned to the National Guard, but was shortly released for health reasons. He then worked as a criminal defense attorney for a law firm before becoming assistant to the New Orleans District Attorney in 1954. In 1961 he was elected public prosecutor himself and sworn in as public prosecutor in May 1962.

Garrison continued the campaign already run by his predecessors to clean up the red light district in the French Quarter and closed the last brothels, as well as the gambling and rag halls. In 1962, Garrison publicly attacked the city's criminal judges. He accused them of refusing funds for undercover investigations , delaying the trials and acquitting the defendants. Eventually he accused her of being influenced by organized crime , for which he was fined in January 1963 for defamation . The verdict was upheld by the appellate court, but overturned by the Supreme Court in 1964 when it ruled unconstitutional the defamation section in the Louisiana Penal Code, which allowed state officials to exercise stricter freedom of expression than citizens.

However, Garrison also faced mafia allegations. The controversial author Gerald Posner writes that Garrison did not crack down on the mafia himself and had contacts with the "godfather of New Orleans" Carlos Marcello , who invited him to Las Vegas and helped him purchase a plot of land. When a grand jury was convened in 1965 to investigate Mafia activities in the city, Garrison declared that Marcello was an "honorable businessman" and that there was "no organized crime in this city". Garrison called the allegations that he was on good terms with organized crime, "amusing" and referred to his cleansing of the red light district; that Marcello was a "boss" he only found out during the anti-mafia campaigns under Justice Minister Robert F. Kennedy (1961–1964). In addition, Marcello is not known to him personally.

In 1965 Garrison was confirmed in office by a large majority. In the following years he achieved national fame with his attempt to refute the thesis of the Warren Report in a criminal trial, according to which the assassination attempt on John F. Kennedy was the work of a lone perpetrator, Lee Harvey Oswald . He also summoned Edward Grady Partin, the main witness in the trial against the mafia head of the team star union Jimmy Hoffa . Historian David E. Kaiser believes Garrison was trying to help Marcello and Santo Trafficante , another mobster , for whom Hoffa had always obtained generous loans from his union's Central States Pension Fund . Frank Ragano, the lawyer for Hoffa, Marcello and Trafficante, offered Partin that Garrison would leave him alone if he did not testify against Hoffa, but he refused.

In 1973 Garrison was charged with taking bribes in connection with illegal pinball machines , but was acquitted. That same year he lost his position against Harry Connick, 1978 he was appointed judge of the appeals court in the fourth Judicial District of Louisiana ( Louisiana's Court of Appeal for the Fourth Circuit selected), a post which he held health until three weeks before his 70th birthday from Gave up reasons. In 1987 Garrison played in the film The Big Easy on the side of Dennis Quaid and Ellen Barkin in a supporting role a judge.

During his investigation, Garrison concluded that John F. Kennedy must have fallen victim to a conspiracy . He therefore indicted the businessman Clay Shaw in March 1967 on suspicion of conspiracy to murder John F. Kennedy. Shaw was arrested and had to wait almost two years for the trial to open in January 1969. The main witness, David Ferrie , had died in February 1967. According to the tracks, he had taken an overdose of Proloid and left two suicide notes , albeit unsigned . During the trial, Garrison was denied many documents and from many political witnesses, including one from Allen Dulles , former director of the CIA and a member of the Warren Commission . The witness Perry Russo was suddenly no longer sure whether he had really heard Shaw, Lee Harvey Oswald and David Ferrie talking about the planned murder at a party. It was later revealed that Garrison had induced him to administer the so-called truth drug thiopental and hypnotize him during the preliminary investigation . In a later interview, however, Russo stuck to his portrayal. Another witness, Charles Spiesel, confessed under cross-examination that he had been haunted by a massive conspiracy for 16 years, in which, among others, the New York police and his own psychotherapist were involved. Prosecutor Garrison insisted on showing the previously unknown Zapruder film to the jury ten times. After only 45 minutes of deliberation, the twelve jurors unanimously declared on March 1, 1969 that Shaw's complicity had not been proven.

Shaw, whose civil existence had been ruined by the prosecution and detention, was released. Two days later, however, Garrison had him arrested again, this time on charges of perjury: Shaw had testified under oath at the trial that he did not know Ferrie or Oswald. After two years of trial in federal court, an order was finally issued on June 7, 1971, prohibiting District Attorney Garrison from continuing the prosecution of Shaw because it was not bona fide .

In 1976 Garrison wrote the political thriller The Star Spangled Contract as well as two non-fiction books about his investigations, A Heritage of Stone in 1970 and On the Trail of the Assassins in 1988 (1992 edition: Who shot John F. Kennedy? - In the footsteps of the murderers from Dallas ). Garrison explained his doubts about Oswald's perpetration in detail in the non-fiction books:

The film JFK - Dallas Crime Scene introduced the world for the first time to many details of Attorney Jim Garrison's investigation, which he began in 1966 after learning from a Senator that there were doubts about the valid version of the assassination in these high circles . In the film, Garrison himself makes a small appearance as Earl Warren .

The reasoning that Garrison advanced in the trial and in subsequent publications is viewed by many authors as misleading, paranoid, or a conspiracy theory .

For example, investigative journalist Edward Jay Epstein claims in his 1969 book Counterplot that the prosecutor's number 19106, which was found in both Oswald's and Shaw's address books, counted around until he found the telephone number of Oswald's murderer Jack Ruby, " deciphered ”. In reality, Shaw wrote down the number of a friend's mailbox, and Oswald's note came from his time in the Soviet Union: It was a mere coincidence that both had the same number. Garrison deliberately selected the encryption algorithms that led to the desired result.

The New York Times called Garrison's persecution of Shaw "one of the most shameful chapters in American jurisprudence."

Anthony Summers , who sees the mafia as the mastermind behind the assassination , certified Garrison in 1980 that his investigations "have brought to light some crucial gold finds, as the special assassination committee of Congress confirmed in 1979."

In 1991 Summers criticized in connection with the production of the film JFK , which preferably relied on Garrison's research material, that Garrison's approach had cast a bad light on doubts about Oswald's sole culprit:

“[…] His stupid rip-off from 1967 was more than an abuse of the justice system. It was an abuse of history, and more than any single factor, [responsible] for a full ten years of discrediting researchers - ten years in which witnesses died and evidence became increasingly obscure. "

Political scientist Daniel Pipes takes Garrison's method of first drawing a conclusion and then arranging the facts to fit (and if they don't claim they have been altered by the CIA ) as a typical example of a “paranoid political Mindset ”.

After the historian Max Holland , Garrison followed a Soviet disinformation campaign with his suspicion that Shaw was an important CIA agent : In order to divert suspicion from Moscow, the Soviet secret service KGB had launched false information about right-wing American Americans in Western media, namely in the Italian newspaper Paese Sera . This newspaper report convinced Garrison that he was on the right track.

In her book False Witness, the author Patricia Lambert claims to have proven numerous lies, errors and misrepresentations that Garrison spread in his books.