By combining the natural constants R and F , the conversion factor for the natural logarithm to the decadic logarithm and a fixed temperature of 25 ° C (298 K), this form is simplified to:

Any combination of two electrodes is called a galvanic cell (e.g. batteries , accumulators or biological cells ). Their open circuit voltage U 0 (historically: electromotive force ) is equal to the potential difference Δ E of the electrodes, which can be calculated as U 0 = Δ E = E acceptor - E donator when applying the Nernst equation to the half-cells . Similarly, it allows the calculation of the equilibrium activities that arise when a voltage is applied to the half-cells.

The Nernst equation is of central importance in electrochemistry , electroplating and electroanalysis because it connects the electrical variable voltage (or electrode potential ) with the chemical variable concentration . Strictly speaking, it is only valid for cells without transfer and currentless processes, but offers a starting point for the derivation of equations in electrochemical systems through which current flows. The Nernst potential U 0 multiplied by the charge z · F for a molar turnover z · F · U 0 gives the Gibbs energy. ΔG = - z · F · U 0 . The Nernst potential indicates the chemical energy of the electrochemical reaction, divided by the charge involved.

The term Nernst equation is used for various derived or extended equations, depending on the application.

The relationship between and the logarithm is plausible because on the one hand it is proportional to the number of particles (or the notation of the chemical equation), on the other hand the individual activities are included in the activity quotient with the power of the stoichiometric coefficients. The logarithm converts the exponent into a factor.

results in the same (electro) chemical potential as per .

is at constant pressure and constant temperature from the reaction recoverable maximum work that fully into useful electrical work can be converted. Due to the law of conservation of energy, the following applies

which results in the general Nernst equation

The general Nernst equation allows the calculation of the equilibrium constants (for ), direction (voluntary for , forced for ) and voltage that the reaction delivers when its redox partial reactions are allowed to run in separate half-cells for the reaction under consideration.

The Nernst equation is used in potentiometric titration . For example, a measuring electrode is immersed in a sample solution and must react to the ion to be determined, that is, the potential of this electrode must be dependent on the concentration of the ion to be determined. This dependency is described by the Nernst equation. During the experiment, it must be ensured that the measurement is carried out without current, as otherwise the potentials would be falsified by electrolysis . A voltage compensation circuit was therefore used for the measurement .

the general form goes directly into the first-mentioned equation. This identity has two practical meanings:

The partial reactions of the so-called oxyhydrogen reaction

spatially separated in hydrogen-oxygen fuel cells . The voltage that can be achieved with this can be calculated using the Nernst equation and under standard conditions is Δ E 0  = 1.23 V. 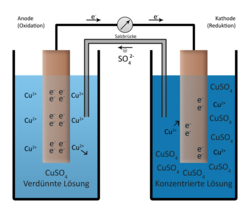 A concentration element consists of two half-cells that contain electrolytes with the same components but with different ion concentrations. It is therefore particularly suitable for demonstrating the Nernst equation.

An example is a copper concentration element made up of two copper electrodes and two copper sulphate solutions that differ only in their concentration. When the current flows, the concentrations in the cells equalize because the following reactions then take place:

The reduction in the half-cell with the greater copper ion concentration c g :

The oxidation in the half-cell with the smaller copper ion concentration c k :

In general, the following applies to the tension of a concentration element :

In the temperature range from 22 to 26 ° C the following applies:

For concentration elements with different elements and concentrations that deviate from the normal conditions, the following formula is used:

over. In principle, glass electrodes for pH measurement represent such H + concentration elements. They contain a solution with a known pH value. If contact is made with a solution with an unknown pH value, the associated measuring device measures a voltage that is converted directly into a pH value with a factor of 0.059 V and displayed. The factor can vary depending on the manufacturing process and must be calibrated before use, but is always close to 0.059 V.

In the case of a lambda probe , the sensor element of which is conductive for oxygen ions, a voltage is established due to the concentration gradient of the oxygen between air and exhaust gas, which is used to set a desired mixture with the lambda control .

Nernst equation in biology and physiology

In biological systems, cell membranes separate areas with different ion concentrations. If the membrane is selectively permeable for a certain ion, it will diffuse along the concentration gradient, but at the same time, since the ion is charged, a voltage ( resting membrane potential ) arises . The equilibrium position of this process can be described with the Nernst equation.

A simplified form of the equation is common, in which R , F and T (310 K) as well as the conversion factor for the decadic logarithm are put into a constant: