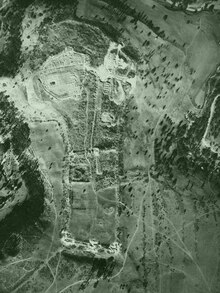 Iustiniana Prima or Justiniana Prima ( Serbian Царичин Град Caričin Grad , German translation: City of the Empress ; for the problem of localization see below) was a late antique - early Byzantine city ​​in southern Serbia. Iustiniana Prima has been described as the “ideal Byzantine city” of the 6th century and is considered by some researchers to be a foundation committed to the sacred theology of Christianity, which transposes the pagan Greek acropolis into a Christian sacred structure. Planned as the new administrative seat of the eastern Roman prefecture of Illyricum , this project was thwarted by the conquest of Sirmium by the Gepids , by an advance of plundering Kutrigurs into the suburbs of Constantinople around 540 and by the Avar-Slavic invasions from 580 onwards. After 545, Iustiniana Prima, as the new Metropolis , only had an administrative function within the framework of the ecclesiastical administration of the Dacian diocese .

Iustiniana Prima is the name of a Roman Catholic titular archbishopric to this day . 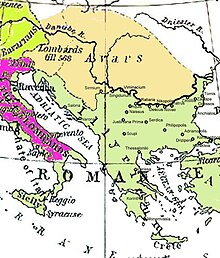 Southeast Europe around the year 600

Iustiniana Prima was built in the northwestern part of the province of Dacia near Dardania . The city was founded away from the main traffic routes and was located above the river valleys of the Pusta Reka and Jablanica in an important mining region. Iustiniana Prima was located in a part of the Eastern Roman Empire in which Latin was not spoken of Greek, and represents the last significant Roman city foundation for the urbanization of the provinces in Illyria .

The city expanded for at least 20 hectares, with recent research showing evidence of a larger area. The city center accounted for eight hectares on the upper part of the ridge. This city center was composed of the Acropolis, the upper and lower town. Around the complex of the Acropolis, the fortress of the city, a stone and brick ring wall system ran. Around the Acropolis, a spacious suburb extended on the slopes, which was protected by a palisade and a moat. The suburbs extended to the handicraft center on the riverside and a reservoir. The complete lack of inscriptions so far is striking.

The conception of Iustiniana Prima was a combination of Hellenistic tradition , the Roman heritage and the late antique-early Byzantine urban planning concept. The public institutions or important state institutions of the church and army were located within the defensive walls. Therefore, the conception of the Acropolis with the cathedral, the baptistery and the adjoining administrative buildings as a church complex is of importance for the interpretation of the late Roman-early Byzantine urban philosophy. The great importance of the sacred in the upper and lower town as well as in the area outside the town center is evident in the numerous basilicas. It is interesting that the latest excavations revealed indications of a connection to long-distance trade. So, very unusual in this region, the skeletons of several camels were found .

After it was founded by the late Roman Emperor Justinian , the city existed from around 530 to 615 and was initially splendidly expanded as a new bishopric. It was a completely new foundation of Justinian. In the planning of the building, classic elements entered a symbiosis with Christian elements: in addition to baths, a forum, and streets lined with colonnades, as in the Mediterranean region, numerous churches were also included.

Caričin Grad, located in today's southern Serbia, was about 45 km from the south of Niš , the ancient Naissus . There are many indications that in the first few years the city was being built very intensively, but that this commitment was soon largely stopped again, perhaps as early as 540. The half-finished city layout only had a short lifespan; Iustiniana Prima was abandoned as early as 615, during the Slavic conquest of the Balkans , when imperial control of the region collapsed . Iustiniana Prima is mentioned in many 6th century sources. Also Procopius of Caesarea reported in his work on the buildings of Justinian (De aedificiis IV, 1).

Justinian had the city planned as the new metropolis of the region near his birthplace Tauresium and himself determined by law (535; amendment 11) that the seat of the Illyricum prefecture should be relocated from Thessaloniki to Iustiniana Prima . She was also given jurisdiction over the Dacian diocese. The actual effect was probably rather small, as the much larger Thessaloniki de facto remained the administrative center. The initially very intensive construction activity in the city has apparently decreased significantly since the 540s.

Nevertheless, the planning and re-establishment of Iustiniana Prima changed the ecclesiastical organization of the Balkans in the long term: in 545 another law of Justinian (amendment 131) underlined the rights and privileges of the archdiocese. This is also confirmed by the correspondence with Pope Gregory the Great (590–604) at the end of the 6th century.

At the beginning of the 12th century, the clergy of the autocephalous Byzantine church province "Bulgaria" (based in Achrida / Ohrid, today the Republic of Macedonia) developed the Ps. theory of the identity of Ohrid with Iustiniana Prima , although Ohrid (the old Lychnidos) to at the time of the fall of Iustiniana Prima ecclesiastically to the Metropolis Dyrrachion (today Durres / Albania). The archbishops of “Bulgaria” / Ohrid therefore occasionally carried out the Greek title “NN, eleo Theou archiepiskopos Protes Iustinianes kai pases Bulgarias” (“NN”) from the middle of the 12th century, then from Demetrios Chomatos (1216–1236) almost generally God's grace Archbishop of Iustiniana Prima and all Bulgaria ”). It stayed that way until the archbishopric was incorporated into the ecumenical patriarchate of Constantinople in 1767.

As an archbishopric, the city was primarily a religious center, but it also had a military-administrative function (e.g. a late form of the principia as the residence of the garrison commander). The city consisted of several parts, each with its own fortification walls: In addition to the acropolis with the bishopric, the upper town and the lower town, there were several suburbs that had so far only been explored to a limited extent, but apparently rather loosely developed. Churches and thermal baths could be proven , but no theaters.

In addition to the religious and administrative buildings, simple urban quarters in the south-western lower town and in the northern upper town have recently been exposed. The construction of the houses, some of which consisted of only one or two rooms, consisted of a base in dry stone construction (without mortar) and a rising element made of wood and clay. The roofs were at least partially covered with flat tiles. The representative buildings of the upper town, however, were largely built with mortar stone architecture. The number of inhabitants is estimated at a maximum of 4,000 and was probably well below this number.

Archaeological excavations have been carried out on site since 1912. It has been carried out as a Serbian-French project since the 1970s, and the Roman-Germanic Central Museum (RGZM) has recently also been involved in the research as a German partner. This newer research integrates bio- and geoarchaeological methods and applies to everyday life in the city. As a result of the work, a digital reconstruction of the city was carried out, which is updated in accordance with the current research progress.

The identification of Iustiniana Prima with Caričin grade has been controversial. Sun has also been attempted justiniana prima in space Skopje in what is now Macedonia (to locate ref : to Snively, see. Justiniana prima , Sp 639-641.). The localization was particularly problematic due to the lack of an inscription that would make a clear assignment possible.

The very likely (but not epigraphically secured) identification of Iustiniana Prima with Caričin Grad has, however, been accepted by most experts. The reasons for this are: