Inscription on the Arch of Titus in Rome

The Latin epigraphy (from the Greek ἐπιγράφειν “write down, inscribe”) is a historical auxiliary science that deals with the study, the creation of directories and the translation of ancient Latin inscriptions . The subject matter is essentially all original Latin written documents from Roman times that have been handed down on permanent material. However, inscriptions on non-permanent materials, such as wax tablets ( tabulae ceratae ) or wooden tablets written on with ink, are also included, while coin inscriptions and documents on papyrus or parchment are reserved for specific disciplines.

Meaning, history and publication of the inscriptions

Latin inscriptions are of inestimable source value for all-round exploration of Roman life and history . The best-known examples include the deed report of the Emperor Augustus ( Res gestae divi Augusti ), who was described by Theodor Mommsen as the “Queen of the Latin inscriptions”, the speech of Emperor Claudius in the Senate in 48 on a bronze plaque from Lyon and the funeral oration of one Witwers from Augustan times, the so-called Laudatio Turiae .

The exact period of Latin epigraphy in the Roman world can only be defined more precisely and therefore differently. The largest temporal expansion extends from the earliest evidence from the Roman royal period to the year 711 AD, the date of the Arab conquest of Spain as the westernmost part of the Roman Empire , which thus also marks the end of genuine Roman epigraphy .

Inscriptions on stone can be found on numerous buildings, with an explanatory or commentary titulus . In addition, there are inscriptions on the bases of statues, on sarcophagi ( epitaphs ), on steles , on milestones ( miliaria ) or on bronze tablets with legal texts, e.g. B. the Tabula Clesiana . The study of Roman names , their abbreviations and the titulatures of dignitaries are also part of Latin epigraphy . Numerous inscriptions have been discovered over the centuries. They are brought together in collections such as the Corpus Inscriptionum Latinarum , and new finds are recorded annually in L'Année épigraphique .

All documents regulating the state community are regarded as instrumenta publica . This concerns first laws, senate resolutions and imperial edicts ( constitutiones ), then military diplomas and finally patronage boards to confirm the admission of a municipality, a municipality or family association to the clientele of a patron.

Inscriptions with information on the Roman calendar , in particular the dies fasti and nefasti , were used by Roman society for orientation in state, religious and economic life. The Acta fratrum arvalium , the minutes of meetings of the Arval priesthood , whose members were appointed from the highest circles in Rome, also belong to this area . One example is the Carmen Arvale , a cult song from archaic times, which was preserved in the files of the Arval priesthood from AD 218 as an antiquarian copy that was no longer understood at that time.

On dedicatory inscriptions ( tituli sacri ) temples, statues, altars, but also objects of daily use such as weapons, vessels or mere votive tablets have been assigned to one or more deities since early Roman times . This also includes the so-called escape boards ( defixionum tabellae ). These are usually thin, usually rolled up lead sheets, often pierced with a nail. On the inside there are curses of people (thieves, rivals), also of animals (horses in chariot races), often combined with cryptic, magical symbols. The texts are written anonymously, mostly kept buried and, in contrast to inscriptions, are generally not addressed to the public. Addressees, if mentioned at all, are rather chthonic gods like Hecate or the gods of the underworld as a whole. 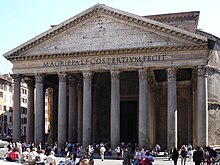 The building inscriptions are characterized by a great variety. This includes first of all the inscriptions on public and private buildings ( tituli operis publici et privati ). The best-known example of the inscription on an ancient building is probably that of the architrave of the Pantheon in Rome:

Marcus Agrippa , son of Lucius, consul for the third time, had (it) built.

Further examples of building inscriptions are also milestones ( miliaria ). On the viae publicae , the Roman imperial roads , they marked the distance from the starting point of a route. The boundary stones of the city of Rome ( Termini ) are also included.

Grave inscriptions ( tituli sepulcrales ) can be found on ash boxes and urns of larger grave structures, on columbaria , but most often on steles , both on the grave roads of Rome and in the tombs of provincial cities or in the cemeteries of the castles along the Limes . Various types of abbreviations are often used:

Example of an epitaph

The inscription on the gravestone of Marcus Valerius Celerinus, which was found in Cologne and can be viewed there in the Roman-Germanic Museum , has been preserved. The following text can be read on the inscription:

If you dissolve the abbreviations of the inscription, you get the following text. For a better overview, the additions and the two corrections for CIVES and VIVOS have been added in italics and with small letters:

Marcus Valerius Celerinus from the district (the tribus ) Papiria, from the village of Astigis, citizen of Cologne, veteran of the tenth legion , the dutiful, loyal twin legion , made [this stone] for himself and Marcia Procula, his wife, during their lifetime.

Finally, those testimonies are to be cited that were not intended for eternity from the start, but are due to chance of tradition and thus give us an insight into everyday life in ancient times. These include Dipinti ( tituli picti , often in the form of election calls) and Graffiti ( tituli scarifati ), most of which are in Pompeii , Herculaneum and Stabiae were discovered - the cities, in 79 AD in the ashes of the.. Vesuvius had perished .

A last category, numerous and diverse like no other, is summarized as small inscriptions ( instrumentum domesticum ) and can be found stamped, scratched or painted on objects of everyday use.

The most common male first names:

Example of an epigraphic text

Inscription on Arch of Septimius Severus in Rome , AD 203

The Emperor Caesar Septimius Severus, the son of Marcus, Pius, Pertinax, Augustus, father of the fatherland , the conqueror of the Parthians, the Arabs and the Parthian Adiabene , the Pontifex Maximus , the eleventh time bearer of the power of a tribune, for the eleventh Appointed emperor for the first time, consul and proconsul for the third time; and the emperor Caesar Marcus Aurelianus Antoninus, son of Lucius, Augustus, Pius, Felix, who for the sixth time has the power of a tribune, the consul, proconsul, father of the fatherland; the best and strongest principes , for the salvation of the state and the extension of the domain of the Roman people and for their extraordinary achievements at home and abroad. The Senate and the People of Rome.