Riverside is a city in the US state of California . It is located in Riverside County and is also its administrative seat. With 303,983 inhabitants (last census 2010) it is the twelfth largest city in California . The urban area covers an area of ​​203 square kilometers and is part of the Riverside-San Bernardino metropolitan area with around 4.5 million inhabitants.

The city was founded in 1870 by John W. North and some Easterners. Riverside is best known as the starting point for the orange industry in California. In 1871, three navel orange trees were planted here, which developed so well in the southern California climate that by 1882 there were already over half a million orange trees in all of California, almost half of which grew in Riverside. Even today, all orange trees in California descend from these three specimens.

Riverside is home to the University of California, Riverside and California Baptist University , as well as La Sierra University. The city is also home to its own college (Riverside Community College).

The Mission Inn , a famous Riverside hotel, has been visited by numerous celebrities, including eight US Presidents .

Riverside is approximately 58 km from the Pacific and is surrounded by numerous mountains of various sizes; some of them have snow in winter. Within the city limits is Mount Rubidoux , a city landmark that has become a tourist attraction. To the south is Lake Mathews just outside the city limits .

Panoramic image of riverside taken from the summit of Mount Rubidoux

Riverside is divided into the following 29 neighborhoods:

In addition, it is planned to incorporate other nearby communities, which would significantly increase both the number of inhabitants and the area of ​​Riverside in the next few years. The idea of ​​taking over the Lake Hills / Victoria Grove area is particularly noteworthy. This would extend the city limits to Lake Mathews .

Large motorway junction in the northeast of the city

Because of the above-average air pollution , Riverside is known for smog . This is particularly caused by the unfavorable wind currents that direct the bad air from the Los Angeles Basin to Riverside. In a 2003 comparison by the National Campaign Against Dirty Air Power, the area, which includes Riverside as well as San Bernardino and Ontario , was named one of the most polluted regions in the United States according to year-round measurements.

In the meantime, public transport has been promoted to curb air pollution; there is a Metrolink station in Riverside , and buses run on natural gas . Through these measures and the cooperation with other cities and counties, the frequency of smog could be reduced significantly; the last smog warnings were decades ago and are now history.

Riverside was founded in 1870 and named for its location on the Santa Ana River . As in 1893 for the San Bernardino County and San Diego County , the Riverside County was formed, was determined to Riverside County Seat .

Before the colonization of Mexico and Upper California by the Spaniards , various Indians stayed in the area of ​​today's riverside . It is not known that permanent settlements existed, but later expeditions were able to document at least temporary villages on the Santa Ana River. Artifacts and holes in stones at Mount Rubidoux that were used to grind flour serve as evidence .

Expeditions of the Spaniards 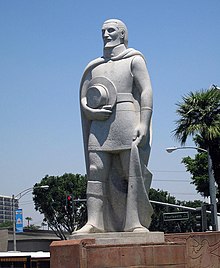 The first documentation of the area in which Riverside is today was made on March 20, 1774, when the Spaniard Juan Bautista de Anza reached it with an expedition aimed at finding a good land connection from southern Mexico to Upper California. He and other members of his group described the area as a wonderful place, smelling of rosemary and other herbs, and offering enough pasture for their horses and cattle. De Anza called this area the Valle de Paraiso (Valley of Paradise).

On December 31, 1775, De Anza returned with a colonization expedition. The group celebrated New Years on the banks of the Santa Ana River . The following day the troops crossed the river. Today a sign points to this place.

To commemorate these explorations, construction of a six-meter-high statue of De Anzas began in 1939, financed by private donors and a grant from the Works Progress Administration . It was completed in May 1942 and is now at the intersection of Market Street and 14th Street.

Foundation and development of the orange industry

Painted orange sculptures can be found all over downtown

The actual tale Riverside's only begins with its founding in 1870 by John W. North , a supporter of abolitionism from Tennessee , who already Northfield in Minnesota had founded. The first residents belonged to the abstinence movement and were Republicans . After the establishment, there were four saloons in Riverside, but they moved because of an increase in license fees. Investors from Canada and England transferred the traditions and activities of the citizens of their countries to Riverside's population, so that the first golf and the first polo course in southern California were built in this city .

Orange trees were first planted in Riverside in 1871 , but the citrus fruit industry for which Riverside is known only got going three years later when a friend gave three Brazilian orange trees to Eliza Tibbets , who is considered the founder of orange growing in California. This species was native to Bahia and became a huge hit in Southern California, although it did not grow well in Florida .

The three trees were planted on Eliza Tibbets' property. One of them was trampled by a cow in the first year and died. In order to better protect the two remaining trees, they were moved to another piece of land. From there each one was transplanted one more time: one by US President Theodore Roosevelt on the property of the Mission Inn hotel (this tree died in 1922), the other at the intersection of Magnolia and Arlington Avenue, along with a memorial stone for Eliza Tibbets. This tree stands here to this day and is now protected by a fence.

With these three orange trees, the orange industry in Riverside was founded. The trees grew well in the southern California climate, so that soon many thousands of Brazil's orange trees were being grown in Riverside. The development of this industry can be seen today in an open-air museum and old packing houses . In 1882 there were more than half a million orange trees in all of California, nearly half of them growing in Riverside. The development of refrigerated railroad cars and a new irrigation system contributed to this boom, making Riverside the richest city per capita in 1895. 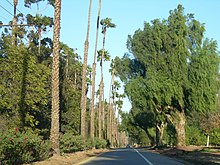 As the town flourished, a small Mission Revival style hotel was built, originally called the Glenwood Tavern and now known as the Mission Inn . It became the preferred home of presidents, nobles, and movie stars who visited Riverside. For example, the accommodation contained a special chair for President William Howard Taft .

Postcards with lush orange groves, swimming pools, and grand houses have drawn both vacationers and entrepreneurs over time. Some even moved to Riverside because the warm, dry climate was good for their health or because they wanted to escape the cold winters in the eastern United States . Victoria Avenue in particular , an avenue lined with orange trees, with its scattered houses from the beginning of the 20th century, is reminiscent of the European investors who settled in Riverside.

In 2010, according to the US Census, there were 303,983 people in Riverside. The population increased by around 48,000 compared to the year 2000. In particular, the number of Latinos increased, who made up nearly half of the population. Another large population group was the non-Latin American whites with a share of 34 percent. The number of Afro-Americans and citizens of Asian origin was just over seven percent, making these ethnic groups minorities. The census also found 91,000 households in the city. If the median age was exactly 30 years, there were 97.6 men for every 100 women.

In Riverside there are Roman Catholic , Greek Orthodox and Protestant churches, as well as synagogues , mosques , Hindu temples , a Buddhist community center and an atheist organization.

Various religious ceremonies are performed at the summit of Mount Rubidoux , including the annual Easter Sunrise Service, which was held on April 12, 2009 for the hundredth time. In addition, every December there is a four-kilometer procession from Our Lady of Guadalupe Shrine to the summit. This tradition aims to strengthen the perception of Juan Diego's walk up Mount Tepeyac in 1531, to whom Mary appeared there ( Our Lady of Guadalupe ).

Riverside is administered by a seven-member city council and a mayor who is elected in a city-wide election; Rusty Bailey has held this position since 2012 . In addition, a city ​​director is responsible for city services .

Riverside has twinned cities with the following cities:

In addition, Riverside has an economic partnership with the Mexican state of Oaxaca . 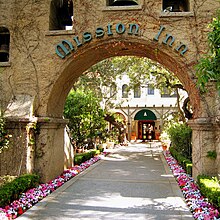 Entrance of the Mission Inn

The city is known for the historic Mission Inn Hotel , the Beaux-Arts Riverside County Historic Courthouse, and the Riverside Fox Theater , where the 1939 film Gone With the Wind premiered. Later acquired by the city, the theater was extensively renovated until 2009 as part of the Riverside Renaissance Initiative. The capacity was increased to 1,600 seats and the stage was enlarged to enable performances like on Broadway . In January 2010, the renovated theater reopened with a show with Sheryl Crow . 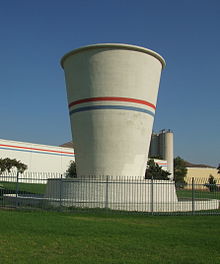 Riverside is also home to the world's largest paper cup , the Dixie Cup . It's eight feet tall and on Iowa Street in front of a former factory.

One of Riverside's landmarks is the famous Mount Rubidoux near the Santa Ana River . It is located between the town of Jurupa Valley and Riverside. There are also three other notable elevations, all of which are undeveloped: Box Springs Mountain , Evans Hill and Tecolote Hill.

Fairmount Park is located at the exit of California State Route 60 at Riverside. This is a natural oasis designed by Frederick Law Olmsted within the city. Among other things, it contains a species-rich pond and offers shelter for many bird species.

The March Joint Air Reserve Base delimits Riverside to the east from the Moreno Valley . This air force base, founded in 1918, is the oldest operating air force base west of the Mississippi River .

Riverside is rich in museums of all kinds. Some of the more famous include the California Citrus State Historic Park and the March Field Air Museum. The Riverside International Automotive Museum, which housed historic racing cars and one of the largest collections of Maserati vehicles in the United States, was closed and the collection was auctioned after the death of co-founder Doug Magnon in June 2016.

In addition, events of all kinds take place regularly in Riverside, such as the Riverside International Film Festival.

Scenes for many famous films were filmed in Riverside, including:

From 1957 to 1989 the Riverside International Raceway existed , on which a Formula 1 race was held in 1960 , from which Stirling Moss emerged as the winner. The circuit was closed to make way for a mall and settlements. Plans from 2003 to build a race track again have not been put into practice.

Riverside was represented at times in minor league baseball with a total of three teams .

There are two Metrolink stations in Riverside . The city is also served by the Southwest Chief .

Riverside is home to several higher education institutions, including the University of California, Riverside , which is known for its 16 acre botanical garden with over 3,500 plants from around the world.

There are also numerous high schools, most of which are publicly owned, but some are also privately owned.