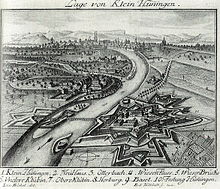 The location of Kleinhüningen, based on a drawing by Emanuel Büchel from the 18th century. In the background the city of Basel. Today's Klybeckquartier is still an estate ("Klübin").

Signs with the Attila coat of arms mark the former parish ban.

The name Kleinhüningen refers to the French village of Hüningen (French: Huningue) on the opposite side of the Rhine. The Germanic suffix "-ingen" stands for a family or group affiliation. So Hüningen means "with the Huno clan".

Folk etymology used to wrongly believe that the name Hüningen refers to the Huns . The village coat of arms, which depicts a Hun in front of his tent, also refers to this. Probably one was thinking of the invasion of Hungary in 917, during which Basel was sacked. These Hungarians were later repeatedly identified or confused with the Huns, who had undertaken raids through Europe under Attila around 500 years earlier . The Kleinhüninger coat of arms is therefore also called the "Attila coat of arms". But the Huns never came to Basel. The H in the Latin name of Hungary (hungarus) testifies to how widespread the erroneous identification of Hungarians with the Huns was.

Today the area north of the meadow is counted as part of the Kleinhüningen district. The former community ban ran further south, roughly at the level of Ackerstrasse, right through what is now the Klybeck district . Boards with the Kleinhüningen coat of arms mark its course.

The Bernoulli silo from 1926. The tower top houses the lift motor and was only added after the Second World War .

The location at the mouth of the meadow was ideally suited for settlement: fertile alluvial land, waters rich in fish and a location relatively protected from floods on a slightly elevated alluvial land terrace.

The oldest evidence of settlement in the area are pottery shards from the Bronze Age (approx. 16th century BC). Nothing else is known about this time.

The earliest sure evidence of a permanent settlement is an extensive early medieval burial ground that was used from the 5th to the 8th centuries. To date, around 300 graves have been examined. Apart from the burial ground, no further information has been obtained from this time.

Before the Rhine was straightened, the estuary of the meadow was a structure of slowly flowing, shallow watercourses, sandbanks and islands, and was known for its abundance of fish. A dispute between the fishermen of the then margravial Kleinhüningen and those from the town of Kleinbasel is documented in 1413. In 1459 there was a legal ruling between Kleinhüningen on the right bank of the Rhine and Hüningen on the left bank due to fishing disputes.

In the Thirty Years War (1618-1648) Kleinhüningen was devastated and the church was also destroyed.

In 1640 Basel bought the village and the surrounding area from Margrave Friedrich V von Baden-Durlach for 3,500 Reichstaler. (For comparison: in 1661, around 20 years later, the city paid 9,000 Reichstaler for the Amerbach cabinet .) At that time the village comprised around 20 houses. After the many years of war, the margrave desperately needed money, while Basel had long wanted to expand its territory to the north. For example, Basel repeatedly tried unsuccessfully to acquire Hüningen on the left bank of the Rhine.

Since the village church had been destroyed in the Thirty Years War, Kleinhüningen was assigned to the parish of St. Theodor after the purchase , which meant a walk of a good two by 3 km for the population to go to church. Conversely, due to the great distance, the rather coarse farming and fishing people could only be controlled poorly. That is why Basel built a new church in Kleinhüningen in 1710 . The location of the earlier church is not documented, but due to the documented short construction time of only 4 months and the relatively low construction costs, it is assumed that the new church was built on the foundations of the old one. To date, this assumption has not been archaeologically investigated.

This church is the only baroque church in the canton of Basel-Stadt. Since it is a reformed church, it is devoid of any other ornaments typical of the baroque. Only the large windows that lead to a light-flooded interior can be seen as a typical baroque element. The construction of the octagonal tower that was erected above the choir is unique . The characteristic onion roof is also atypical in the region. Originally the tower was a little lower than it is today; When the church received a new bell in 1910, for which there was not enough space in the tower, it was raised by a few meters.

1679 left Louis XIV. By Vauban the opposite Hüningen that the Peace of Westphalia had been slammed France, the fortress Hüningen expand. This also included a bridge over the Rhine and a fortified bridgehead on the actually margravial right bank of the Rhine. The fortification of the bank straightening led to a loss of fishing grounds on the left bank of the Rhine, which increasingly led to violent conflicts between the fishermen from Hüningen and those from Kleinhüningen. In 1736/1737 the salmon fishing dispute led to a state affair between the federal state of Basel and France.

The exposed Kleinhüningen was also shot at several times, the last time in May 1815, shortly before the defeat of Napoleon in Waterloo. To commemorate this bombardment, a few cannon balls were visibly built into the northern church wall.

The people of Basel remember Kleinhüningen as a fishing village, but agriculture and handicrafts have always been practiced. Many women also worked as laundresses for the wealthy Basel districts. The laundry was gladly given to Kleinhüningen because the meadow water is softer than that of the Rhine and therefore led to better washing results. The village was also a popular excursion destination, so from 1897 one of the first Basel tram lines to Kleinhüningen ran in front of the «Krone» inn.

From the middle of the 19th century industrial companies were settled in the area around Kleinhüningen. In 1864, Alexander Clavel-Merian moved his paint factory to an area between Klybeckstrasse and Unteren Rheinweg, which at that time still belonged to Kleinhüningen. The company later became the “Society for the Chemical Industry in Basel”, or CIBA for short . This was followed by other chemical companies for dyes and pharmaceutical products and, not least because of the soft water of the meadow, the Schetty dye works, from which the piece dye works emerged in 1917.

The industrialization led to a marked change in the population structure of Kleinhüningen. Between 1850 and 1900, the number of inhabitants tripled due to workers who moved in, and the former fishing village became a workers' village, which was now large but still poor. In 1891, the village authorities considered merging the rural community with the city of Basel for the first time. In 1893 Basel took over the administration of the village and in 1908 it was incorporated. However, there are associations that maintain the memory of the former village.

The most radical changes were brought about by the construction of the Rhine harbor , which cut off the former fishing village from the Rhine. The project began in 1914, but was delayed by the First World War , so that excavation of the harbor basin did not begin until 1919. In August 1922, the first tugboat pulled up in Kleinhüninger Hafen. Among the port facilities, the Bernoulli Silo , which was built between 1923 and 1926 and is now a listed building, is particularly noteworthy.

The construction of a second port basin was planned early on. This was dug by hand in 1936–1939 as part of a job creation project by the Basler Arbeitsrappens and put into operation after the Second World War. The excavated material was used to fill the standing ramps of the St. Jakob football stadium .

From 1950 to 1970 the port experienced a construction boom. A large part of the old village center fell victim to the construction of the covered transshipment yard on Hafenstrasse in 1952/1953, whose prestressed concrete roof of 30 meters was a pioneering architectural construction at the time. But otherwise the village had to increasingly give way to the port expansion: The southern village development was demolished for the newly laid out Hochbergstrasse. The newly created Bonergasse displaced more houses. The historic Markgräflerhof had to make way for the port railway siding in 1935 . With the construction of harbor basin II, the last farms in Kleinhüningen disappeared. The extensive landscaped garden of the Clavelschen Gut (today's “Schifferhaus” restaurant) was built over with tracks and roads.

In connection with the long-planned demolition of the historic “Drei Könige” inn in 1983, local resistance against the further destruction of the village formed at the end of the 1970s. The initiative petered out again, but at least the remaining historical buildings were recorded in an inventory . Little is left of the original village. Only between the village church and the Pfarrgasse are a few houses that give an idea of ​​the former village structure.

Kleinhüningen is traditionally a lower-class district with little reputation and a high proportion of foreigners. In connection with the further development of the port area, however, “upgrade” plans are now haunted by the planning offices. 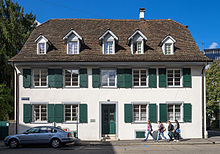 The rectory where CG Jung grew up

The psychiatrist CG Jung grew up as the son of the village pastor in Kleinhüningen. The rectory is still standing and is now used again as such. 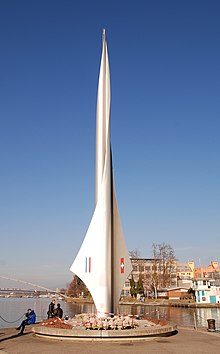 The 18.7 meter high pylon made of 15 millimeter thick table iron symbolizes the border triangle. It was designed by Wilhelm Münger in 1957.

A test borehole to a depth of 5000 m for the planned geothermal project Deep Heat Mining Basel caused five light earthquakes with decreasing magnitude (from 3.4 to 2.9) between December 2006 and March 2007. According to a later risk analysis, presented on December 10, 2009, further severe earthquakes would have been expected if the project had been continued. The project was then discontinued.

Quarters and residential areas in the city ​​of Basel