Bettingen ( Swiss German Bettige ) is a political municipality and, besides Riehen, the only rural municipality in the small canton of Basel-Stadt in Switzerland .

Betti gene neighboring municipalities are the basel city Riehen and the Baden-Wuerttemberg locations Grenzach-Wyhlen and Inzlingen .

On March 2, 1513, the city of Basel bought the village of Betticken from the brothers Christoffel and Hanns Truchsässen von Wolhusen. The purchase price was 800 guilders. This purchase act is ultimately the reason why Bettingen is now part of the Swiss Confederation.

The community consists of two different settlements: On the one hand, the actual village of Bettingen , a former Alemannic court settlement, which is evident from the typical name ending '-ingen'. The village lies in a hollow between the surrounding heights. On the other hand, there is the considerable group of houses on the Chrischonahöhe around the former pilgrimage church. This settlement goes back to the founding of the pilgrim mission in 1840 by Christian Friedrich Spittler .

As early as 1356, a church on St. Chrischona was first mentioned, which is said to have been built on the place where, according to legend, the body of St. Chrischona is buried. In 1925 the settlement was expanded to include the deaconess mother house and a nursing home; to the south of this is the Chrischona Clinic, built by the Basel community between 1963 and 1965.

The most striking point of Bettingen is standing on the St. Chrischona television tower of Swisscom , which went into operation 1984th At 250 m, it is the tallest free-standing structure in Switzerland and stands on the highest point in the canton of Basel-Stadt.

The bus line 32 of the Basler Verkehrs-Betriebe connects Bettingen and St. Chrischona with the local transport network of the Northwestern Switzerland tariff association. 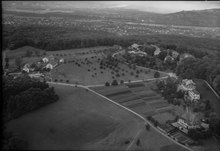 Political communities in the canton of Basel-Stadt