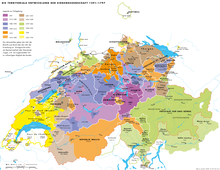 The Territorial Development of the Confederation 1291–1797

Original canton and original Switzerland are names that emerged in the 19th century and replaced the older term forest site . The original cantons or Urschweiz are the cantons of Uri , Schwyz and Unterwalden , whereby the name is based on the idea that the alliance of the Old Confederation or Switzerland was "founded" by these three cantons .

The date of their amalgamation is the date of signature of the oldest surviving federal letter at the beginning of August in 1291. However, between the "original cantons" there was a network of alliances and mutual assistance that had already gradually built up, without a single event particularly prominent. In addition, the idea that the Swiss Confederation developed on the basis of this alliance is a construct of national historiography of the 19th century and of intellectual national defense from the 1930s onwards.