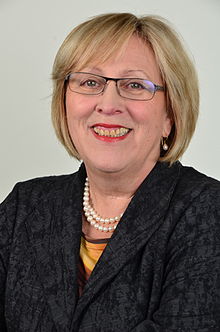 After graduating from a grammar school in Innsbruck, Eva Lichtenberger studied at the Pedagogical Academy in Innsbruck from 1972 to 1974 and worked for several years as a primary and secondary school teacher in Tyrol. In 1975 she began studying psychology and art history while working , and from 1979 Lichtenberger also studied political science at the University of Innsbruck . She completed her studies in 1987 with a doctorate (Dr. phil.).

From the mid-1980s, Eva Lichtenberger began to get involved in the green movement. In addition to her commitment to the women's chair, she was the spokesperson for the “Haller Luft” citizens' initiative and made her first political experiences there. Lichtenberger was also an advisory member of the environmental committee of the city of Hall in Tyrol . From 1988 she was the project manager of the cross-border environmental initiative Green Alternative ARGE ALP, which aims to protect the Alpine region.

In the 1994 elections, the Greens in Tyrol were able to increase their share of the vote and were given a seat in the state government. Eva Lichtenberger was the first Green in Austria to become Regional Councilor for Environmental Protection.

In 1999 Lichtenberger moved from Tyrol to the National Council . From 1999 to 2004 she was a member of the Transport Committee, the National Defense Committee and the Main Committee (responsible for European affairs) and Spokeswoman for the Greens for Transport and Tourism. From 2002 to 2004 she participated as a deputy member of the Austrian National Council in the European Convention , which was entrusted with drafting the EU Constitutional Treaty , the forerunner of the Lisbon Treaty . From 2003 to 2005 she took part in the Austria Convention , in which a fundamental administrative and constitutional reform was debated.

In 2004 Eva Lichtenberger was elected to the European Parliament . Lichtenberger was a member of the Committee for Transport and Tourism (TRAN) in which she deals with a wide variety of mobility issues, road freight transit, air traffic, the question of postal liberalization, river navigation, noise protection regulations and various other important transport and infrastructure policy issues. Her focus was on environmental and local protection as well as social compatibility.

As a deputy member of the Legal Committee (JURI), she dealt with a wide variety of topics. Although her focus was on data protection and copyright issues, the subject areas of the JURI are very broad. It is about inheritance and divorce law, application of EU law, regulation of the financial market, corporate and corporate law. In inheritance and divorce law, her focus was on protecting women's rights and same-sex partnerships.

In both JURI and TRAN she was the spokesperson for the Greens / EFA parliamentary group for the 2009-2014 legislative period.

Furthermore, she was a full member of the delegation for relations with the People's Republic of China, in which she discussed environmental and economic policy as well as human and women's rights issues. In her role as Vice President of the Tibet Intergroup (an intergroup), she dealt with the Tibet issue. In her role as deputy in the delegation for relations with the USA, which she has held since 2009, she mainly dealt with the issues of climate protection, internet freedom and data protection. Furthermore, she was in this delegation in the working groups on data protection and transport issues. The controversial SWIFT agreement and the PNR agreement were the most important topics on the data protection side. In the area of ​​climate protection, the main priority was to hold a dialogue on a new, global climate agreement with the USA. The dominant climate policy issue was the US opposition to the expansion of emissions trading to include air travel.

In her first legislative period (2004–2009) she was rapporteur for the European Commission's Green Paper on European Transport Networks and a deputy member of the EU-Mexico Joint Parliamentary Committee and the Euro-Latin America Parliamentary Assembly, where she actively campaigned for women's and human rights. In the highly controversial patenting of software, Lichtenberger played a major role in the resistance to the very far-reaching Commission proposal. The rejection of this guideline was a great success, especially for open source and many small and medium-sized companies that would otherwise have been exposed to legal attacks by large companies.

Animal welfare is a particular concern of her. In the course of her work in the transport committee, she campaigned massively for a reduction in animal transport times and transport conditions. She supported campaigns (8 hours, banning laying hens in cages ) and petitions, took part in various conferences and actions in order to set an example for animal welfare and to generate public interest / awareness.

At the end of 2006, Eva Lichtenberger was elected as deputy parliamentary group leader with an overwhelming majority to the board of the Greens / EFA, in which she was active until 2011. Since 2008 she has been a member of the advisory board of EuroparlTV , the Internet television channel of the European Parliament. This service offers live broadcasts from parliamentary and committee meetings, news and debates and instructional videos with subtitles in all 24 official EU languages .