The German alphabet is the alphabet that is used to write the German language . It is used in Germany , Austria , Switzerland , Liechtenstein and Luxembourg , as well as in countries with German-speaking minorities such as Belgium , Denmark ( North Schleswig ), Italy ( South Tyrol ) and Poland ( Upper Silesia ).

The designations of the individual letters have neutral gender (neuter gender): "das A", "das B" etc.

Letters of the German alphabet in Fraktur (with variants and ligatures ), around 1750. At that time, J was not yet regarded as a letter different from I (unlike, for example, in the English-speaking area).

Development from the Latin alphabet

Origin of the umlaut letters

Origin of umlaut points using the example of the ä

On this poster from 1806 the umlaut was still written with a lowercase e above the vowel (see the words king, civil duty, brothers )

A title page from 1843 with new and old umlaut forms

The umlaut letters (ä, ö and ü) were created from the combination of the respective Latin letter (i.e. a, o and u) with an e indicating the umlaut . They have only been in general use in this form since the 16th century. Today umlaut letters are also used in numerous other languages.

In Old High German manuscripts umlauts are designated only where an appropriate letter was available, namely e for short ä and later iu for long above sea after the diphthong to above monophthongiert was. The letters o and u could mean both o and u as well as ö and ü or üe in Old and Middle High German scripts .

Since around the 13th century, the ligature æ for long or openly spoken ä was used in some manuscripts , or an e or i was placed above the umlauted letter, and more rarely after it. In the German Kurrent script , which has been used more and more since the 16th century, this small e looks like two vertical lines that eventually became the two dots that are frequently used today. Some fonts still use the vertical bars for the umlaut letters.

The Eszett (ß), also known as the sharp s , is originally a ligature from the long ſ (s) and either the round s or the z in the late medieval bastards and the modern Fraktur script . From around the beginning of the 19th century, the antiqua became more common in German-speaking countries. At that time, most of the Antiqua typefaces did not contain any letters for the ß , so prints from the 19th century are often set without ß. At the Orthographic Conference of 1901 it was determined that the type foundries would in future have to deliver their Antiqua typefaces with the letter ß and that a ß would have to be supplied for existing typefaces. The long s (ſ) was also occasionally used in the Antiqua, for example it can still be found in the Leipzig Duden from 1951.

Introduction of the great Eszett

SS is usually written in capital letters for ß, previously also SZ. In official documents, the ß was also used within capital letters , for example in the family name WEIß , in order to enable the distinction between white and white in capital letters . The creation of a capital letter was already discussed at the beginning of the 20th century, but none of the drafts caught on. The capital ß (uppercase eszett) was finally included in the Unicode Standard Version 5.1 on April 4, 2008 as "U + 1E9E" (ẞ) and on June 24, 2008 also in the ISO / IEC 10646 standard . The use of the uppercase eszett is mandatory for the official spelling of geographical names.

On June 29, 2017, the German Spelling Council included the capital ß in the official body of rules. Instead of STRASSE , you can now write STRAẞE with a capital ß. The spelling STRASSE is still common . This is also shown in the official regulations.

A mere consonant is acoustically difficult to distinguish from others of its kind. Therefore the naming of the consonant letters differs from the usual sound-letter assignment . The following shows how the letters are usually named (pronunciation according to IPA ):

Especially when spelling it is helpful to pronounce a fixed word with the corresponding first letter instead of the letter, for example "Friedrich" for F. See German-language spelling tables .

In the script, letters are mostly noted as such, for example: "Vogel writes itself with V, not with F." For a few letters there are also clarifying spellings that are occasionally used. According to Duden these are:

Template for the Latin source font . The umlauts were arranged separately here, the ß as the last lowercase letter. 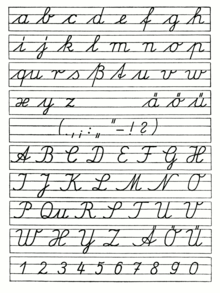 The 26 basic letters (without umlauts and ẞ) have the following alphabetical order:

When listing the entire alphabet, the umlauts are usually added at the end, the ß either after s or together with the umlauts at the end of the lowercase letters. For example, in the official rules on the spelling reform, the characters are presented in two lines as follows and grouped with larger spaces:

When whole words are sorted alphabetically, umlauts and ẞ are treated differently (see below).

The alphabetical sorting of words or names is basically based on the order of the letters in the alphabet. In the case of umlaut letters and eszett (ß) as well as the occurrence of digits and special characters, however, there may be deviations that depend on the exact area of ​​application. For example, the DIN 5007: 1991 standard describes two variants:

In Austria, other standards are sometimes used.

Frequency of letters in German

The most common letter is the E, followed by the N. The rarest letter is the Q. The type of text (poetry, prose, operating instructions, etc.) has no influence on the distribution of letters.

In the case of the letter pairs (bigrams), ER and EN are most common, mainly at the end of the word. The most common groups of three (trigrams) are SCH and DER.

Number of letters in the alphabet

When it comes to the question of how many letters the German alphabet contains, the first thing to note is the convention that upper and lower case letters are not counted separately. For example, A and a are not considered different letters, but rather two forms of the same letter. Correspondingly, letter forms such as the „(" long s ") and the ʒ (" z with sub-slings ") as well as ligatures - the merged spelling of two letters - are not counted as additional letters, but as special forms of letters (see glyph ).

However, it is not clear how many different letters are part of the German alphabet. Depending on how you understand the term " alphabet ", 26 or (less often) 30 letters are added to the alphabet, sometimes 27 letters:

In connection with the comparison of the numerous Latin alphabets and the question of how many letters they contain, it is obvious that the alphabet in question means the entirety of the letters that are used to write words in the respective language - i.e. in German not only the 26 letters from A to Z, but also the umlaut letters and the ß. Corresponding definitions can be found in the specialist literature. This results in the number of 30 letters in the German alphabet.

Otherwise, “alphabet” is usually defined as the entirety of the letters in a font that are arranged in a fixed order. The order of the letters is fixed in the German alphabet for the 26 letters from A to Z, but not for the umlaut letters and ß (see above for the order of the letters ). For this reason it is usually said that the German alphabet contains 26 letters. In this perspective, the umlaut letters and ß are taken into account, for example, with the wording that they are “added” or that there are also four additional “special letters”.

Another motive for counting only 26 letters in the alphabet can be that the umlaut letters and ß are not evaluated as independent letters to the same extent as the 26 letters from A to Z. They have developed from combinations of other letters ( see above origin) and can still be replaced today by letter combinations (e.g. ae for ä or ss for ß). In addition, the umlaut letters ä, ö, ü are written as the vowel letters a, o, u with a diacritical mark and thus appear as variants of other letters. In comparison, the ß appears more independent, because it cannot be interpreted as a variant of another letter. Against this background, the view is justifiable that the German alphabet comprises 27 letters (a to z and ß), while ä, ö, ü are to be regarded as the letters a, o, u with a diacritical mark. In connection with the introduction of the capital ß, the ß was referred to as the 27th letter of the alphabet.

People with umlauts and / or ß in their names often have problems, as many electronic systems cannot process these letters and one has to resort to paraphrases (ae, oe, ue, ss). Especially in identity cards and passports, the name is then written in two ways, once correctly and in the machine readable zone (MRZ) in transcription (. Eg Schr ö the / WRITE OE THE Wei ß / WEI SS ). The same name can be spelled differently in different documents (credit cards, health insurance cards, BahnCard), which can cause confusion and suspicion of forged documents, especially abroad. Austrian identification documents can (but do not have to) contain an explanation of the German special characters (in German, English and French, e.g. 'ö' corresponds to / is equal to / correspond à 'OE').

Even before the introduction of the great ẞ was recommended ß in surnames in documents for reasons of clarity as uppercase to use (eg. As HEINZ GRO beta E).

German naming law recognizes special characters in the family name as a reason for a name change (No. 38 NamÄndVwV). Even a simple change in the spelling, e.g. B. from Schr ö the Schr to oe of Wei or ß to Wei ss , is regarded as such. On 1 October 1980, the Federal Administrative Court again found that the technically caused erroneous reproduction of special characters on electronic systems can be an important reason for the change of surname (the plaintiff spelling wanted his name of G ö tz in G oe change tz , but initially failed at the registry office; file number: 7 C 21/78).