This article covers the Marshal of the Royal Air Force Arthur Harris. For the physicist of the same name, see A. Brooks Harris . 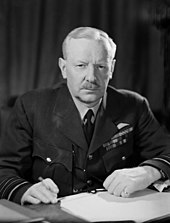 Sir Arthur Travers Harris, 1st Baronet GCB OBE AFC , called Bomber-Harris , (born April 13, 1892 in Cheltenham , † April 5, 1984 in Goring-on-Thames ) was a high-ranking officer in the Royal Air Force , most recently in rank a Marshal of the Royal Air Force . During the Second World War he was Commander-in-Chief of the RAF Bomber Command from February 1942 and is one of the most controversial figures in the aerial warfare of the Second World War because of the area he ordered bombing German cities .

Arthur Travers Harris was born in Cheltenham on vacation to his parents. His father was a member of the British civil service in India ( Indian Civil Service (ICS)). After finishing school in Dorset , according to Norman Longmate's biography, Harris faced a decision between the army and the colonies at the age of 16 . Harris opted for the latter in 1908. According to his own information, he was busy panning for gold, carriage rides and farming in Rhodesia .

In 1914 he joined the 1st Rhodesian Regiment of the British Army as a trumpeter . He served for the South African Union in the war in German South West Africa (now Namibia ) before returning to England in 1915 and joining the newly established Royal Flying Corps . Harris was in action in France and England and achieved five aerial victories on the biplanes Sopwith 1½ Strutter and Sopwith Camel , whereupon he was awarded the Air Force Cross (AFC). At the end of the war he had the rank of major .

In 1919 he stayed with the newly established Royal Air Force and in April 1920 he became a squadron leader and commander of Digby Air Base and No. 3 Flying Training School. He later served in British India , Mesopotamia and Persia, among others . In Mesopotamia he commanded a Vickers Vernon transport squadron .

In 1922 Harris was the leader of an air transport squadron in Iraq where the British attempted to break local resistance by launching terrorist attacks on towns and villages before the use of infantry became necessary. Harris had the idea of ​​additionally equipping all transport aircraft with bomb carriers, "it was not a matter of precision attacks, but of terrorizing the population as widely as possible."

From 1930 on Harris was active in the air staff for the Middle East, where he was involved in the suppression of various uprisings of the local people against British colonial rule . He justified this with the fact that, in his opinion, the Arabs only understand a "policy of the hard hand" ("The only thing the Arab understands is the heavy hand").

On February 14, 1942, the British Aviation Department issued the “ Area Bombing Directive ” . Harris was appointed commander in chief of the RAF Bomber Command in February 1942 . Based on templates Frederick Lindemann , a close adviser of Churchill , from which the word creation carpet bombing (Carpet Bombing) comes, Harris felt only by saturation bombing of cities, the German Reich to be able to force them to surrender.

Harris made a significant contribution to the development of a planned firestorm (quote from A. Harris in the planning of the air raid on Lübeck on March 29, 1942 : "Historic city center burns well"). In the first wave, in addition to high-explosive bombs and incendiary bombs, large air mines (blockbusters - "blockbusters") were dropped, which covered the roofs and destroyed windows in order to reinforce the chimney effect . In a second wave, incendiary bombs were dropped, which quickly started a conflagration. However, this did not always succeed due to meteorological and urban planning factors.

To the German air defense and the so-called " canopy bed method " working night hunting, z. B. to take by surprise along the Kammhuber Line by local congestion, he developed the method of bomber flows, in which as many bombers as possible flying in on the same course attacked a target in a short time instead of flying in individually and in a broad front. To demonstrate the effectiveness of his concept, Harris pulled together all available bombers for Operation Millennium in the spring of 1942 in order to carry out the first " thousand bomber attack " on Cologne at the end of May with 1,047 machines . This attack was crucial to convince the innumerable British skeptics of the effectiveness of air strikes and to prevent the disbanding of Bomber Command.

The technical requirements for precise strikes against strategic points such as factories for aircraft, tanks and other armaments were still developing in the middle of the war. The heavy losses of the 8th Air Force in its attacks in 1943 and early 1944 confirmed its adherence to the night attack for the time being until the deployment of new American long-range escorts, whereby the RAF's night attacks by creating the 24-hour threat also contributed to the success of the American daytime attacks strategic point targets remained significant.

During the area bombing, the civilian population and the city's infrastructure were the primary targets of the attacks, in addition to the industrial facilities in the city area. In his opinion, civilian targets should be deliberately attacked in order to break the morale and resistance of the German population (so-called moral bombing ). At the beginning of the bombing, Harris commented on his motivation: “ The Nazis 'entered' the war with the rather childish notion that they could bomb anyone else at will and no one would bomb back. In Rotterdam, London, Warsaw, and in almost half a hundred other places, they carried out their rather naive theory. They sowed the wind and now they reap the storm ” . In his memoirs he later wrote: “Despite everything that has happened in Hamburg, bombing remains a relatively humane method” .

In addition to the bombing raids on Germany, several large cities , particularly in Italy, were bombed, causing considerable damage to residential areas, for example in Milan , Naples and Palermo .

Memorial to Arthur Harris in London

On September 15, 1945 Harris resigned from the Royal Air Force in a dispute with the new Prime Minister Clement Attlee and withdrew bitterly to South Africa . His honors by being named Hereditary Baronet of Chipping Wycombe in the County of Buckingham on January 24, 1953 ( he had declined to be considered a peer ) and the 1992 unveiling of a veteran-funded monument in front of St Clement Danes Church in London by the Queen Mother Elizabeth were highly controversial among the British population. Within 24 hours, the memorial was showered with red paint and later damaged several times, after which it was under guard for several months. In this context it is also important that his air war strategy was costly for the aircraft crews. Almost 45% did not return home, a total of 55,573 airmen were killed in the attacks on Germany. This is also why Harris was often called "Butcher" (English for butcher or butcher).

The historical and legal qualifications of the Allied air war strategy and thus of Harris' position are assessed differently. According to objective or military criteria, the targeted destruction of residential areas and inner cities was controversial. From a military point of view, the strategic consequences of the air war were generally considerable, as the German armaments production was forced to relocate extensive production-hindering production - according to Albert Speer , the Allied air raids on aircraft halved possible production. Over a million soldiers were deployed in the anti-aircraft cartillery and were therefore absent from the fronts. In addition, half a million temporary personnel were called in, including many young people as anti-aircraft helpers .

All of this was primarily due to the daytime attacks by the USAAF against the armaments industry and not to the night attacks by the Royal Air Force against the civilian population for which Arthur Harris was responsible. The most famous missions of the Bomber Command outside of Harris' strategy were: the attacks on the dams ( Operation Chastise ), the sinking of the battleship Tirpitz (November 1944), the bombing of submarine bunkers of the Kriegsmarine on the French Atlantic coast and the destruction of systems of the German V-weapons program ( Operation Hydra , Éperlecques , Mimoyecques ) as well as direct tactical support during the landing of Allied troops in Normandy ( Operation Overlord ).

Harris has expressed his point of view in particular in his book Bomber Offensive , which describes his life path. He argues that National Socialist Germany began to target the civilian population with terrorist attacks ( Guernica , Coventry , Rotterdam , Warsaw , London ). It was the task of the British authorities to ensure a quicker end to the war and to avoid their own sacrifices, which, for example, a land war or trench warfare like in the First World War would have involved. Before the United States entered the war (December 1941) or before D-Day , the Allied landing in Normandy on June 6, 1944, given Britain's island location, only the offensive strategy of the Bomber Command of the Royal Air Force would have the security of UK guarantee.

Harris also emphasizes the importance of air support for a successful deployment of land forces. For comparison, he refers to the German Blitzkrieg strategy at the beginning of the war, in which the rapid advance of the army, especially the tanks, was only possible due to massive and quickly available air support (bombers and fighter pilots). The fact that the German air force was largely destroyed towards the end of the war or tied up by defending its own territory against the Allied bombers meant that the German army lacked the necessary support from the air force. The Allied air superiority helped the British and US troops and the Red Army decisively to push back the Germans.

In the 1954 British feature film May 1943 - The Dam Busters by Michael Anderson , Arthur T. Harris of Basil Sydney is portrayed.