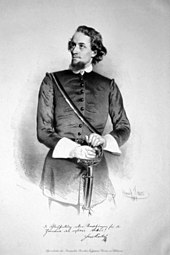 Hans Kudlich (born October 25, 1823 in Lobenstein , Austrian Silesia , † November 10, 1917 in Hoboken , New Jersey , United States ) was a doctor and Austrian politician and went down in history as a "peasant liberator" for Austrian, Bohemian and Polish farmers a. He later fled to the United States, where he received citizenship there, campaigned for Germanism and practiced as a doctor.

Hans Kudlich was born in 1823 as the youngest son and ninth of eleven children of the robotic farmer Johann Kudlich and his wife Eleonora Marie, b. Ulrich was born, who owned two farms. From 1834 to 1842 he attended high school in Opava , where Gregor Mendel, who later discovered genetics, was a student at the same time . Both of your teachers were the regional historian Faustin Ens . From 1842 to 1848, Kudlich first studied philosophy and then law at the University of Vienna . He found accommodation with the father-in-law of his older brother Hermann , the Viennese notary August Eltz, whose sons he taught as private tutor .

His brother Hermann (1809–1886) was a member of the First German National Assembly in the Paulskirche in Frankfurt and in the subsequent rump parliament in Stuttgart .

Time as a politician 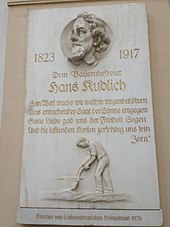 Memorial plaque in the courtyard of the Palais Niederösterreich , Vienna

On March 13, 1848, Kudlich was wounded by a bayonet stab during the demonstration in front of the Lower Austrian Landhaus in Vienna . He initially stayed in Vienna and worked there as a member of the Academic Legion for his idea of ​​freedom. In May he went to Lobenstein to heal his injury and was won over to run for the Austrian Reichstag .

On June 24th he was elected as a member of the Reichstag in a runoff election in Bennisch , Freudenthal district. In the decisive second ballot he also received the votes of the Czech peasant delegates who had withdrawn their candidate (farmer Mitschka from Slatnik) before this second ballot.

As the youngest member of the Austrian Reichstag, on July 24, 1848, he submitted the momentous motion to abolish the peasant subservience, including all rights and obligations arising therefrom, such as robot and tithe , a motion that was slightly modified on August 31 and September 1, respectively decided and on September 7, 1848 came into force as a basic relief patent .

In the October Uprising in Vienna in 1848 , Kudlich took a lively part in the efforts to maintain the power of the Reichstag, turned in vain to the Upper and Lower Austrian peasantry to win them over to armed intervention ( Landsturm ), and was persecuted as a troublemaker by the emperor's general. With the Reichstag he moved from Vienna to Kremsier in Moravia in November .

On March 4, 1849, the implementation of the “Peasant Liberation Act” was initiated by a patent from Emperor Franz Joseph I.

After the Reichstag in Kremsier had been blown up by soldiers, Kudlich fled to Prussian Silesia and on to his brother in Frankfurt am Main . He then took part in the Palatinate uprising and became a member of the provisional government. Finally, he fled via Donaueschingen and Freiburg in Switzerland .

“The formation of a German imperial throne without Austria is therefore likely. Only later years will we feel what we are losing from this breakup. Because the predominance of the Slavs will depress our nationality. ... But Germany always remains a haven and refuge to which we can escape in times of need. Because we never give up our right to stay with the German people, but keep it until the hour comes when we can exercise it. "

Act as a doctor

In Bern he was accepted into the house of the liberal professor of medicine Philipp Friedrich Wilhelm Vogt . From 1849 to 1853 he studied medicine in Bern and Zurich , where he passed his doctorate in March 1853 . He also married Vogt's daughter Luise († 1884, Freiburg im Breisgau ). Due to his active participation in the Vienna October Uprising and the Palatinate Uprising, Kudlich was sentenced to death in absentia in 1851 and 1854. He then emigrated to the United States via Le Havre and settled in Hoboken , New Jersey , where he ran his own medical practice. He soon became an advocate of Germanism in Hoboken and New Jersey, helped found many German clubs and schools, and stood up for the anti-slavery movement and the election of Abraham Lincoln as President of the United States.

He maintained a lively correspondence with his homeland, in which, despite his American citizenship, he repeatedly professed his Germanism, but turned against all anti-Semitism because, in his opinion, it weakened the forces of Germanism.

After Emperor Franz Joseph had pardoned him in 1867 and the death sentence against him had been overturned, he and his nine children visited his old home several times.

Hans Kudlich died in Hoboken in 1917 at the age of 94. The once youngest member of parliament died as the last of the 383 members of the First Austrian Reichstag still alive. Since his last wish was: “I want to go home”, his urn was solemnly buried in 1925 in the urn hall of the Hans-Kudlich-Warte in Lobenstein.