The monastery Hradisko (Latin: Monasterium Gradicium ; German: Kloster Hradisch ; Czech: Klášterní Hradisko ; colloquially also: Moravský Escorial ) is a former monastery , which first existed as a Benedictine abbey and later as a Premonstratensian abbey . It is located on the northern outskirts of Olomouc on a small hill near the March ( Morava ). 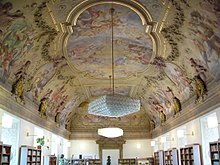 Stucco work in the monastery library by Baldassare Fontana

At the place of the monastery originally stood an older Přemyslid castle ( Hradiště ), which was the seat of the Olomouc prince Otto I the Fair , son of Duke Břetislav I , since 1061 . In 1078 Otto and his wife Euphemia handed the castle over to the Benedictines from the Břevnov Abbey and endowed the monastery to be founded with rich foundations. The abbey church was built in 1078 by the Olomouc bishop Johannes St. Stephan was consecrated and the complex was therefore designated in 1087 as the “St. Stephen's Monastery in the Olomouc suburbs”. In 1151 the monastery was assigned to the order of the Premonstratensians by Bishop Heinrich Zdik and settled with canons from Litomysl . The Benedictine monks had to leave Hradisch and found admission to the Opatowitz monastery in Eastern Bohemia. In the following years the Annales Gradicenses were written in the monastery of Hradisch . For the Abbey of the Norbertine were among twelve parishes and the pilgrimage to the "Holy Mountain" with a provost.

Over the centuries, Hradisch Abbey was plundered, devastated and destroyed several times: in 1241 by the Mongols , 1429 by the Hussites , 1432 by the Taborites , and in 1642 in the Thirty Years War by the Swedes.

Today's buildings were built in the Baroque style from 1661 to 1737 according to plans by the architects Giovanni Pietro Tencalla and Domenico Martinelli . They are among the architectural masterpieces of the time.

In 1706 Johann Wenzel Zeller von Rosenthal bequeathed his allodial rule Hrochow-Teinitz with the attached Trojowitz estate to the abbey in a will . In the 18th century the monastery was a center of Jansenism . During the secularization of 1783/84, 85 Premonstratensian canons lived in the monastery. The monastery buildings served as the state general seminary for Moravia until 1790 . From 1802 it was used as a military hospital. Today the freely accessible facility houses the Olomouc military hospital.