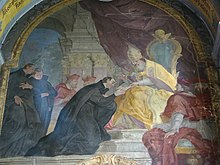 Wall fresco in the Maria Schnee church in Olomouc

Ceiling fresco in the Corpus Christi chapel in Olomouc

Ceiling fresco of the Aula Leopoldina in Breslau

Handke began an apprenticeship as a painter in 1708 with the Freudenthal painter Daniel Langer. From 1713 he worked as an assistant to the painter Christian David in Mährisch Trübau and from 1715 to Ferdinand Naboth in Olomouc , where he acquired citizenship in 1722 . A year later he was accepted into the painters' guild . After the death of his master Naboth, he continued his workshop and in 1724 he married his widow, whose name is not known. The marriage resulted in their daughter Paulina, who was born in 1728.

His first independent commission was in 1715 to complete the painting of the Linden Church ( Kostel v lipkách ) near Römerstadt, which had been started by his master Ferdinand Naboth. There he immortalized himself with a self-portrait ( man with slouch hat ). Until 1728 he was mainly active in Olomouc and the surrounding area. In the following years he received several orders from the Jesuits . In 1728 he frescoed the refectory in the Troppauer Kolleg and in 1730, together with his student Johann Franz Hoffmann, he painted the Königgrätzer Jesuit Church. In 1732 he frescoed the ceiling in the Aula Leopoldina and the Oratorium Marianum in the then Jesuit University of Breslau , which the artists Franz Joseph Mangoldt , Felix Anton Scheffler and Johann Albrecht Siegwitz were also involved in decorating . In 1733 Handke was busy painting the refectory in the Glogau Jesuit College. He also created many portraits of emperors, popes and bishops as well as altar and saint paintings.

After the death of his wife in 1742, Handke married Maria Veronika Sadler († 1755), a daughter of the Tyrolean sculptor Philipp Sadler . From this marriage came the son Johannes Josephus, who also became a painter. Another son and daughter Johanna Franziska Aloisia died in the child and youth altar. After the death of Maria Veronika in 1755, Handke remarried to a widow in the same year, who however left him after a year.

Handke was an unusually productive and successful fresco painter. In the years between 1715 and 1755 he verifiably created 80 frescoes or fresco cycles, some of which are no longer preserved. His colleagues included Johann Georg Etgens , Karl Franz Joseph Haringer and the Jesuit Johannes Kuben .

Handke wrote a self-biography of his artistic work, in which he also addresses the problematic relationship between the artist and the client with regard to appropriate remuneration. It was published in 1911 under the title Johann Christoph Handke's autobiography as a Festschrift of the Silesian Society for Patriotic Culture by Richard Foerster in the Breslauer Verlag Graß, Barth and Comp. published. The festschrift also contains a copy of the self-portrait from the Römerstadt Linden Church.