In the mathematical sub-area of group theory, the symmetrical group denotes a specific group with 6 elements. It can be described as a group of the six permutations of a three-element set. Alternative names are and . It is isomorphic with the Dïedergruppe  , the group of congruence maps of the equilateral triangle on itself.

The effects of the pictures , , , and

If you look at the congruence maps that transform an equilateral triangle into themselves, you find 6 possibilities:

These congruence maps can be combined by executing them one after the other , whereby a congruence map is obtained again. One simply writes two congruence maps (often without linking symbols, or with or ) next to each other and means that

In this way the alternate-element group of all congruence maps of the equilateral triangle is obtained. If you enter all the links formed in this way in a link table , you get 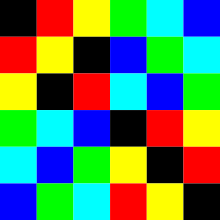 Linking table of the symmetrical group S 3 in color. The neutral element (the identical picture) is black

If you want to the product of two elements of figure out, so they were looking in the truth table first with marked column, with marked line on; at the intersection of this column and row is the product.

The graphic on the right shows the link table in color. This colored link table follows the order of the elements in the table on the left. Colored link tables, as in the graphic, are used in the online encyclopedia for mathematics MathWorld , as are those in grayscale.

If one generalizes this construction by replacing the equilateral triangle with a regular corner, one arrives at the concept of the dihedral group . Therefore, the group discussed here is also referred to as.

Elements of the S 3 as permutations

A congruence mapping of the equilateral triangle is already clearly defined by how the corners labeled 1, 2 and 3 are mapped onto one another. Each element of can therefore be understood as a permutation of the set . In the following, the two-line form is given first, followed by the cycle notation of the elements and their order :

Not an Abelian group

The subgroups next to the trivial subgroups and themselves are:

While you get a different two-dimensional representation when by replaced, but this is equivalent to the specified. These considerations lead to the following character table :

The general linear group 2 of degree over the residue field , is isomorphic to .

create a group that is isomorphic to the sequential execution as a group link . The other 4 group members are:

The link panel is as above .
The 6 group members differ in the use of elements

also in the value tables if has at least 5 elements.

This is isomorphic to the automorphism group of Klein's group of four . This follows easily from the observation that every permutation of the three elements of order 2 of the Klein group of four defines an automorphism.