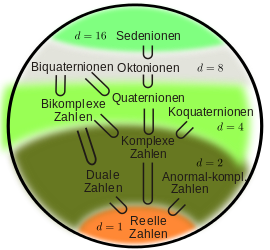 Overview of some common sets of hypercomplex numbers with their respective dimensions and their subset relations.

Some authors require in addition that the algebra with respect to multiplication associative is. In particular, the real numbers are themselves an algebra of hyper-complex numbers.

The following properties are not required:

Hypercomplex numbers can be represented as a sum as follows:

The conjugation is an involution on the hypercomplex numbers, that is, that

The abnormally complex numbers are defined by

The dual numbers are defined by

Note that they have nothing to do with binary numbers .

The quaternions (symbol often after their discoverer WR Hamilton ) form a four-dimensional algebra with division and associative (but not commutative) multiplication. The quaternions are therefore an oblique body .

The Sedenions (symbol ) are sixteen-dimensional hyper-complex numbers. Their multiplication is neither commutative, associative nor alternative. Nor do they have a division; instead they have zero divisors .

In the case there are subalgebras that are isomorphic to the three two-dimensional algebras mentioned above; They are characterized by the fact that the main diagonal elements always match (which corresponds to the real part) and rules apply to the elements of the secondary diagonal that determine the algebra shown: