With retroactive effect from January 1, 2013, the Oldenbourg Wissenschaftsverlag and the Akademie-Verlag were bought by the De Gruyter publishing house .

The technical journal Journal for gas lighting and related types of lighting was the first product of the Oldenbourg publishing house in 1858. In the following year, Rudolf Oldenbourg and Heinrich von Sybel founded the historical journal , which is important for German history , but was initially published in the Cotta'sche publishing house. In 1873 the field of school books was added.

Well-known scientists published in the Oldenbourg publishing house as early as the 19th century, including Heinrich von Sybel, the Nobel Prize for Literature Paul Heyse and the chemist and hygienist Max von Pettenkofer . In the 20th century the publishing house sponsored the space pioneer Hermann Oberth and published well-known series such as Oldenbourg Grundriss der Geschichte under his name.

On June 3, 2008 the Oldenbourg publishing group, which belonged to the Cornelsen group from 2004 to 2012, celebrated its 150th anniversary in the Deutsches Museum . On this occasion, the museum set up an exhibition on the Oldenbourg Verlag for three months; the publisher issued a commemorative publication on its history. 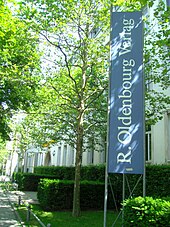 The publisher's logo in front of the former headquarters in Munich

"The overall program of the Oldenbourg publishers currently includes around 4800 books and 50 magazines." The main subjects of the technology departments are environmental technology, supply technology, building technology and automation technology. In the larger area of ​​science, the publisher publishes on history, politics and philosophy, on social and economic sciences, and on natural and engineering sciences. The school book sector publishes works for general education schools in Germany, Austria and Switzerland; In 2009 this area generated sales of around 20 million euros through books and magazines .