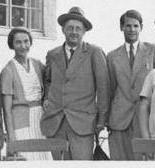 Fritz Joachim Weyl was the son of the writer Helene Weyl and the famous mathematician Hermann Weyl , with whom he published the book Meromorphic functions and analytic curves in 1943 (originated from Hermann Weyl's lectures at the Institute for Advanced Study ).

Weyl studied at Swarthmore College with a bachelor's degree in 1935 and at Princeton University with a master's degree in 1937 and his doctorate in 1939 with Salomon Bochner (Analytic Curves). From 1946 he taught at George Washington University . He was later a professor and dean of Hunter College in New York City.

In 1989 he and Gordon D. Goldstein and others received the Computer Pioneer Award for early work on computers at the Office of Naval Research (from 1946).