As mica group , shortly mica or mica , refers to a group of minerals from the Department of phyllosilicates with the same atomic structure .

The most prominent feature of mica is its layered structure and the very weak bond between these layers. This results in the perfect cleavage characteristic of these minerals parallel to these layers. They have a low Mohs hardness of 2 (parallel to the layer planes) to 4 (all other directions). Their color varies from white to brown-black; green or pink are less common. The line color is white. The very low electrical conductivity of the mica is decisive for many technical applications .

Mica is one of the most common rock-forming minerals and is an important component of many igneous ( e.g. granite , diorite , pegmatite ) and metamorphic ( mica schist , gneiss ) rocks.

Other flaky or flaky minerals that do not belong to the mica group are also referred to as mica , such as iron mica . 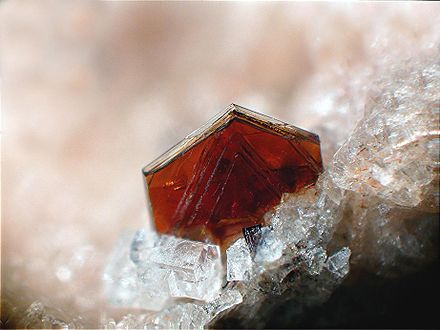 Glimmer (or glow ) means weakly glow or shine. But since time immemorial, the name has meant a blender that doesn't keep what it promises. This is why some types of mica are pejoratively referred to as " feline silver " or " feline gold ". In English the mineral is called mica , from Latin mica 'crumbs' (frequent occurrence in small leaves) or micare 'sparkle', 'shimmer', 'radiate'.

Mica was mentioned as early as 1546 by the mineralogist Georgius Agricola . In the 20th century, mica was first examined with X-rays by Charles-Victor Mauguin .

The current classification of mica was presented by a working group of the IMA Commission for New Minerals, Classification and Nomenclature. It divides the mica group into three subgroups based on the occupation of the D position, that is the cation position between the TOT sandwiches:

These subgroups are in turn subdivided according to the occupation of the octahedral coordinated G position:

This classification was later supplemented by further subgroups. The classification is based on the cations on the D position (Na, Rb, Cs, NH 4 instead of K) and the priority occupation of the G, T and X positions with ions that are unusual for mica (e.g. Mn, Cr, V instead of Fe or Mg on the M positions, O or F instead of OH).

The various micas of the individual subgroups with their idealized compositions are listed below. Strunz, Dana and the IMA assign the mica minerals differently to the groups in individual cases. The IMA classification is shown here.

According to Dana these represent the margarit subgroup, according to Strunz the lepidolite series.

Clintonite in an orthoclase-rich matrix

According to Dana these represent the hydroglimmer, according to Strunz the glauconite series.

Some traditional names are permitted as designations for mixed crystal compositions if a more precise characterization is not possible.

Mica has the chemical composition:

In this context, the coordination of a cation denotes the number and type of its nearest neighbors. For example, a 12-coordinate cation is surrounded by 12  oxygen atoms .

The dominant ions are highlighted in bold . The ions in brackets can be represented in any mixture, but are always in the same relationship to the other atom groups ( substitution ).

Structurally, the mica is characterized by layers of TO 4 tetrahedra and GO 6 octahedra. An octahedron layer is enclosed by 2 tetrahedron layers. These “TOT sandwiches” are only very weakly connected to one another via large, low-charge interlayer cations.

A distinctive play of colors can often be observed in thin sections due to cutting effects. This scintillation (birds-eye structure) is an important determinant. 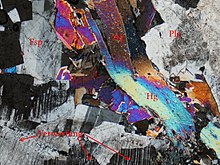 Mica belong to the group of layered silicates. The Si 4+ ions form four very strong, covalent bonds to four O 2− ions, which surround the Si ions in a tetrahedral manner. The oxygen ions sit on the corners of the coordination tetrahedra and the silicon is in their center. For the sake of clarity, only these coordination polyhedra are shown on the structure diagrams and not the atoms themselves.

These SiO 4 tetrahedra are connected via corners (shared oxygen) to form theoretically unlimited layers. The layer structure of mica is characterized in that each SiO 4 with three other SiO tetrahedra three common vertices (oxygens) 4 tetrahedra is connected and the free fourth peaks indicate all tetrahedral a layer in the same direction (see Fig. 1 ). The resulting silicate anion complex has the empirical formula [Si 4 O 10 ] 4− .

A characteristic of the mica structure is that these layers of silicate and octahedron are connected to one another in such a way that each layer of octahedra is enclosed by two layers of silicate. The silicate tetrahedra are connected to the octahedron layer with their free tip (oxygen). This unit is comparable to the I-Beams of the pyroxenes , amphiboles and other biopyriboles . The charges are largely balanced within this assembly. The final oxygen on the outwardly facing base surfaces of the SiO 4 tetrahedra are all bound to two Si ions and have almost no free binding valences. These mica structural units are therefore only connected to one another via weak ionic bonds with the interlayer cations of the D position. This is the structural explanation for the excellent flaky cleavage of the mica.

These mica structural units, also referred to as TOT or 2: 1 layers, are stacked on top of one another in the direction of the crystallographic c-axis (Fig. 3) and can be rotated against each other around the c-axis with n * 60 ° (0 ≤ n ≤ 5). Different stacking sequences of differently oriented mica structural units result in various mica polytypes with different symmetry (monoclinic, orthorhombic, trigonal). The symmetry of the polytype is sometimes reduced by an orderly distribution of different cations on the octahedrally coordinated G positions, e.g. B. from C2 / m (monoclinic) to C-1 (triclinic).

The mica polytypes can be divided into three subfamilies:

The names of the polytypes are essentially composed of the number of differently oriented structural units (numbers, d for 'disordered') and the crystal class (capital letters M for monoclinic, T for trigonal, O for orthorhombic, H for hexagonal).

Mica (possibly biotite ) from the Rössing Mountains in Namibia

Mica is a common component of igneous , metamorphic and sedimentary rocks . The muscovite variety is found particularly often in quartz-rich granites or pegmatites , for example , and also in metamorphic rocks such as phyllite . As a very weather-resistant variety, it also occurs in sedimentary rocks such as sandstone . Biotite weathered much more easily and is therefore more likely to be found in granite or diorite .

The main producers are the USA , India (states Jharkhand , Bihar and Rajasthan ) and the People's Republic of China .

Mica slate was mined as early as prehistoric times and the mica obtained from it was probably used for cosmetic purposes. Even today, mica - under the INCI name Mica (CI 77019) - is used in decorative cosmetics , e.g. B. in powder to achieve a shimmering effect.

In Ayurvedic medicine , mica is used for lung diseases and intestinal diseases.

Mica coated with inorganic interference layers , for example silicon dioxide and titanium dioxide , has been used since the mid-1980s as a pearlescent or interference pigment in, among other things, car paints and cosmetics. 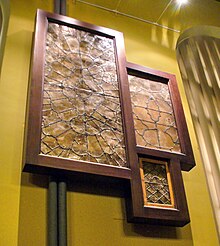 Due to the easy cleavage along the layer planes, mica can be split into thin transparent disks. Where mica was readily available and at reasonable prices, while glass was too expensive, the mineral was used for window panes , especially in rural areas .

Due to the high melting point of the mineral, it was used, among other things, as a viewing window in room stoves, as a glass replacement for inspection windows in industrial melting furnaces or as protective glass for lanterns before the spread of refractory glass .

Mica and artificial mica are used as electrical insulators and as a carrier material for heating wires ( soldering iron , toaster, electric stove ). Mica can withstand temperatures of over 600 ° C, artificial mica from 400-500 ° C.

Mica washers are used as insulating washers between power semiconductor components and their heat sinks . Coated mica disks with punched holes are used in electron tubes to build up the electrode system.

Mica is also used as a dielectric for low-loss mica capacitors for high frequencies and powers , as window material for counter tubes in Geiger counters and - in the form of artificial mica - as a cover in microwave ovens .

Until the 1940s, mica was used as the vibration membrane of the sound box in gramophones , before being replaced by metals such as aluminum and copper .

As a panel material, the material is used in shipbuilding , building construction and the manufacture of chimneys.

Since mica has a very smooth surface after cleavage, it is also used as a substrate for self-assembling monolayers and as a matrix in atomic force microscopy . Since mica is optically birefringent , cleavage-produced platelets are used as retardation plates in the optical industry .