Development of caries with presentation of the symptoms

As a toothache (including toothache , Dentalgie and odontalgia ) refers to a generally strong, continuous pain feeling that the teeth run out. Also be indirect problem areas, such as inflammation of the gums / periodontal apparatus , often counted to being infested zones and nerve irritation show usually connected. Inflammation originating from the tooth or the tooth-supporting structure is known as odontogenic infection .

Despite their seemingly solid, robust structure, teeth are one of the parts of the body that can cause extreme pain in the event of illness or damage. This is due to the pronounced and sensitive nerve cords that each individual tooth has. This can already be seen in the sensitivity of the teeth to hot or cold food when it is consumed in the mouth. This painful irritation is particularly evident and significant with exposed tooth necks, since the protective enamel is missing here. Without tooth enamel , targeted pressure, for example with a fingernail, on the relevant areas can cause slight stinging irritation, especially if the damage is still relatively fresh.

Causes of toothache include missing tooth enamel, tooth decay and inflammatory diseases such as periodontitis , but of course also purely mechanical injuries and damage. This includes not only teeth grinding , but also badly fitting tooth crowns , which can also be an inflammatory disease. The disease of the teeth and of all other relevant oral organs is promoted by the high proportion of microorganisms , especially bacteria , which are located in the oral cavity due to their nutritional function . Food residues, moisture and the relatively low density of the body's own antibodies (also in saliva ) offer a favorable natural environment for an alien fauna .

In rare cases, acute toothache can be the only symptom of a heart attack .

The anamnesis of the quality and quantity of pain is used by the dentist together with the percussion test, the sensitivity test and the X-ray image to differentiate between caries , pulpitis and apical ostitis .

Caries (Fig. 1) is usually a provoked pain, mostly from sweet, less often from sour. Salty solutions are practically out of the question, although like sweet solutions they exert an osmotic pressure and thus cause pain. However, human taste can only tolerate significantly lower concentrations of salt solutions (approx. 1% solution) than sugar solutions (approx. 30% solution or much more). The lack of spontaneous pain in tooth decay is typical. If there is no eating, for example at night, there is no pain. The sensitivity test is positive. The percussion test (knock test) is negative. Typical toothaches after sweet pain triggers subside after a few minutes.

With pulpitis (Fig. 2), spontaneous pain occurs - for example at night. The pain attacks typically start suddenly and last much longer than with caries. Between the pain attacks there are pauses with relative freedom from pain. These painless breaks initially last several hours, but over the course of a few days they shorten to a few minutes. In contrast, the duration of the pain attacks is only a few minutes at the beginning, but then increases continuously. Often there is also an uninterrupted pain. The typical pain progression of pulpitis is only found in 50% of pulpits. Many variants are possible.

A vitality test helps with pulpitis mainly to localize the guilty tooth, but less to differentiate between tooth decay and pulpitis. With pulpitis there is often very severe pain, which can radiate, so that localization can be very difficult for the patient. He can often only specify the affected side, but not whether the cause of the pain is in the upper or lower jaw or which tooth is responsible. If the practitioner relies solely on the patient's information, the treatment can easily apply to a wrong tooth. Above all, he will see teeth with carious defects or teeth with large or defective fillings as "suspicious" and possibly take an X-ray to detect hidden caries. 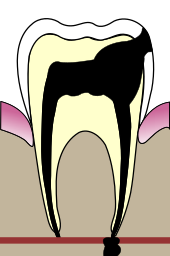 Typical of the pain quality in apical ostitis (Fig. 3) is the addition of tapping pain. Depending on the severity of the pain, it only occurs after the tapping test with a dental instrument (e.g. grip of the dental probe) or is described by the patient as mild bite discomfort or severe bite pain. Occasionally, the tooth can be so sensitive to touch that the patient cannot even touch it with their tongue. The tooth may no longer react to cold stimuli (from the vitality test). He can also react positively (severe pain from the cold stimulus) if the pulp has not yet died completely.

In the case of apical ostitis, the differential diagnosis must then be carried out to determine which of the four possible stages ( periapical , endosseous , subperiostal , submucosal ) it is in. This is done by means of an x-ray and scanning the vestibular area of ​​the jawbone at the level of the root tip (in the oral vestibule ).

A chronic apical osteitis usually runs completely symptom-free and painless. Typically, however, there was more pain in the anamnesis (a few weeks to months ago). Usually the X-ray confirms the diagnosis.

In a gangrene may any toothache may be missing. The history sometimes shows that the patient had had severe toothache a few months earlier. Because of the typical, strong, yummy, nauseating smell in the carious cavity that is usually present, however, the diagnosis is not difficult. However, if the gangrenous pulp is closed by an intact cavity, then enormous pressure can build up in the pulp with correspondingly severe pain and the symptoms of pulpitis or apical ostitis.

The cause of atypical toothache ( atypical odontalgia ), in which the pain is not associated with any recognizable physical damage to the tooth or gums, is largely unexplained . In addition, the painful area can change. This pain is often accompanied by an increased sensitivity to pressure. The duration can vary from a few days to chronic pain.

The Buddenbrooks syndrome is a very rare but all the more dreaded misdiagnosis in dentistry. Toothache-like complaints in the lower jaw, preferably the left side, lead to a visit to a dentist . If a medical correlate can actually be found, for example a pulpid or devitalized , purulent tooth, the primary cause remains undetected, namely a coronary heart disease , which can be life-threatening.

Toothache, even if it is to a bearable extent, very quickly leads to swelling , an inflammatory edema, of the mouth areas that are in the area of ​​the source of pain , which can be seen in the typical swollen, "thick" cheek . Furthermore, the pain is accompanied by a “throbbing” in the case of inflammation, as if the perceptible pulse had expanded to the painful areas (see also abscess ). This is due to the increased blood flow that this stimulates . The cooling of the corresponding area restricts the blood flow and thus helps to reduce the pain.

Regular and thorough dental care significantly reduces the amount of harmful bacteria in the oral cavity. Incipient damage can also be stopped or sometimes even reversed.

Aching teeth that have already been severely damaged must be treated by the dentist , depending on the cause with fillings, a root canal treatment or periodontal treatment . Clove oil is used as an analgesic ( superficial only ), antibacterial and anti-inflammatory agent.

Saint Apollonia with a pulled tooth

Prayers to Apollonia of Alexandria are said to help with toothache.

Sometimes it is advisable not to sleep on feather or down pillows , as these are supposed to "pull" the toothache, which can be attributed to superstition . The intensification of the toothache ( night pain ) is due to the lying position and thus the changed blood pressure situation in the head area, which also increases the pain-triggering pressure in the pulp cavity of the tooth.