Staraja Russa ( Russian Старая Русса ) is a city in Russia and with 31,809 inhabitants (as of October 14, 2010) the third largest town in Novgorod Oblast .

The city is located about 250 kilometers south of Saint Petersburg and 99 km south of the regional capital Veliky Novgorod . The Polist River flows through the city from the catchment area of Lake Ilmen . Staraya Russa is the administrative center of the Novgorod Oblast Rajon of the same name . 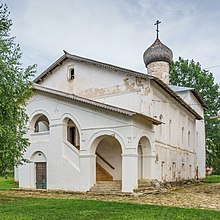 The place was first mentioned in 1167 under the name Russa (Руса). Originally part of the Novgorod Republic , Russa was the center of the salt works in the 13th and 14th centuries . In 1478 the place became part of the Moscow Grand Duchy and developed during this time both as a salt boiler and as a trading place, since it was on the waterway " from the Varangians to the Greeks ". Since the middle of the 16th century the place was named Staraya Russa (Старая Руса), which means something like "Old Russa".

In 1608, Staraja Russa was largely devastated in an attack by Poland-Lithuania . Even though it was rebuilt a few years later, the place has not been able to regain its former importance for trade since then. In 1763 Staraya Russa fell victim to a conflagration and was then built on with stone houses according to a new general plan. A little later, in 1776, it received city rights and became part of the Novgorod Governorate .

At the beginning of the 19th century, salt production in Staraya Russa was stopped. A mud bath was set up in 1828 on the site of the former saltworks. Since then, the city has been a health resort , also because of several medicinal water springs located here . In 1858 a ship connection was established across the Ilmen Lake from Staraya Russa to Novgorod, and two decades later a rail connection was also established between the two cities.

During the Second World War , Staraya Russa was occupied by the Wehrmacht from August 1941 to February 1944 and was only liberated by the Red Army in the course of the Leningrad-Novgorod operation . Adolf Urban, among others, died in the village's first aid station in 1943 .

In 1942 the bell was confiscated from the "Church of Saint Mina" and brought back to Lübeck, where it was cast in 1672 by Albert Benningk . In Lübeck the bell fell into oblivion and was never rung. In 2000 the whereabouts of the bell could be clarified, and on February 18, 2001 the bell was ceremoniously returned.

Today in Staraya Russa there are mechanical engineering and chemical industries as well as a number of food factories.

The poet Fyodor Dostoevsky lived in the city from 1875 to 1878 and 1880 . Today a museum and a memorial in Staraya Russa commemorate this.

The composer Sergei Rachmaninov was born in 1873 on the Semjonowo estate near Staraya Russa and lived there until the family moved to Saint Petersburg in 1882.