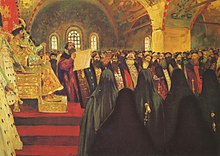 The Semski Sobor ( Russian Земский собор ) was a Russian meeting of the estates that initially met at irregular intervals. Members were representatives of the estates with the exception of the subservient peasants. The meeting could be called by the tsar , the patriarch or the Duma .

The Semsky Sobor was connected with the development of the unified Russian state, the weakening of the princely- boyar aristocracy, the increased political power of the lower and middle nobility and the rise of the urban upper classes in the 16th and 17th centuries.

The first Zemsky Sobor met in 1549 during the reign of Ivan IV . Members were initially the representatives of the clergy, who were appointed by a synod , and of the secular class, which essentially consisted of the sovereigns and from which the Duma later emerged. Important questions of society and the state were discussed at the meetings. Since the 1560s , members of the third estate, which consisted of rich citizens, merchants and craftsmen, also took part in the meetings of the Semski Sobor. The Semsky Sobor elected Boris Godunov in 1598 and Michael I in 1613 as tsar. The Semski Sobor met once a year under Tsar Michael.

Michael I's successors, the Romanovs , created an absolutist government . The first step towards this was the Prikas for secret state affairs, which was installed by Alexei I , whereby the Zemsky Sobor gradually lost its importance. The assembly played a final important role in the drafting of the Imperial Code of 1649 . At that time the Semski Sobor consisted of 315 members.

In 1922 the Amur Provisional Government called together a "Zemsky Sobor", who designated Nikolai Nikolayevich Romanov as tsar.