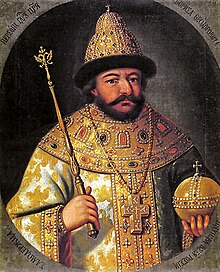 Boris Fjodorowitsch Godunow was born in 1552 as the son of the noble landlord Fyodor Ivanovich Godunov and his first wife Stepanida Ivanovna (last name unknown). The legend of Godunov's descent from the Tatar prince Chetmursa , who allegedly left the Golden Horde in 1329 and was accepted into the service of Ivan I. Kalita , is rejected by modern Russian historical research.

Boris Godunov seized power in Russia on January 7, 1598 after Fyodor I died as a usurper and was proclaimed tsar on February 21, 1598 after being elected by Semskij Sobor and crowned on September 1, 1598 . He was the first ruler after the end of the house of Rurik . Godunov was severely attacked by the Moscow boyars who blamed him for the murder of Dmitri Ivanovich , the youngest son of Ivan IV .

The Smuta , a time of turmoil and unrest, began with the reign of Godunov. Domestically, Boris Godunov was faced with the problems of the country's economic disruption and the mass exodus of the peasants, which he tried to stop by temporarily suspending the right to withdraw. His elevation of the Russian metropolis to patriarchy in 1589 not only increased the reputation of the church but also that of the state and became significant for the country's cultural and political independence. In his foreign policy, he tried to form a grand coalition against the Turks .

Under his rule, foreign trade revived mainly through Arkhangelsk and the Volga . In 1601, however, there was a deep social and political crisis, which was accompanied by a great famine . At this time, a runaway monk appeared who pretended to be the surviving Tsarevich Dmitri (the false Dimitri ), claimed the Tsar's throne and, with the support of Vasily Shuisky, was able to quickly mobilize an army.

Boris Godunov died unexpectedly in this unstable situation, probably after a stroke, on April 23, 1605. His grave is on the grounds of the Trinity Monastery of Sergiev Posad .

The national poet Alexander Pushkin processed the tragic life of Boris Godunov in a drama of the same name . Modest Mussorgsky wrote the opera Boris Godunov based on his motifs . Sergej Bondarchuk filmed the drama in 1986. Its adaptation was screened in the competition at the 1986 Cannes Film Festival . The subject had already been used in 1710 in the opera Boris Goudenow by Johann Mattheson .

Another prominent literary processing of the life of Boris Godunov comes from Alexei Tolstoy (trilogy of drama The Death of Ivan the Terrible , 1866 - Tsar Fedor Ivanovich , 1868 - Tsar Boris , 1870).