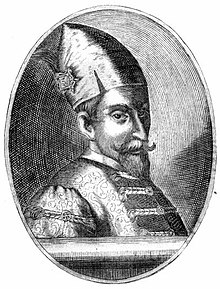 Fyodor was mentally retarded and completely insignificant as a ruler. He was nominated twice (1573/74 and 1587) by his father and his advisors as a candidate for the Polish throne, but each time without success.

The first years of his government were characterized by sharp disputes at court and the work of a Regency Council, which Ivan IV had set up shortly before his death and which consisted of five personalities:

The two-year-old half-brother of the ruler, Dmitri Ivanovich (* 1582), the son of Ivan IV with Maria Nagaja, was exiled to Uglich in May 1584. Boris Godunov became the tsar's brother-in-law in 1587 by marrying his sister.

With the childless death of Fjodor, the Rurikid dynasty ended .

The entire reign of Fjodor was marked by economic decline and crises, which became more and more pronounced in the wake of the defeats the Tsarist Empire suffered in the final phase of the Livonian War . Through the enactment of laws against the incipient rural exodus, the social situation of the lower classes was further aggravated.

In contrast, foreign policy successes could be achieved. The five-year Russian-Swedish War came to an end in 1595 with the Peace of Täysinä (Teusina) . Russia recognized the Swedish possession of Estonia and Narwas , but with Jam , Koporje and Ivangorod regained important positions on the Gulf of Finland , as well as on the Karelian Isthmus ( Kexholm ). At the same time, it was possible to develop further areas in Siberia and to extend Russian rule to areas in the northern Caucasus .

In the years that followed, Russia's relations with Poland , Sweden , the Crimean Khanate and the Ottoman Empire intensified . Domestically, social disputes began to develop, which were to break out with great force at the beginning of the 17th century.

Commons : Fyodor I.  - Collection of pictures, videos and audio files