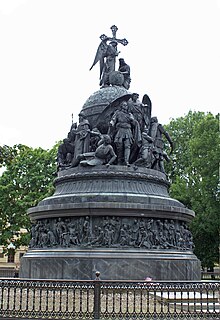 The National Monument Thousand Years of Russia ( Russian Тысячелетие России ) is a monument in front of the St. Sophia Cathedral in the Novgorod Kremlin , which was inaugurated in 1862. It marked the millennial anniversary of the beginning of Rurik's rule in Novgorod , which is commonly considered to be the beginning of Russian history and statehood.

The author of the project was Mikhail Osipovich Mikeschin , who is also famous for the monument to Catherine the Great in Saint Petersburg (1873) and Bohdan Khmelnytskyi in Kiev (1888). 40 sculptors and architects initially took part with their projects in an invitation to tender issued in 1859. The choice fell on the 24-year-old and at that time little-known draftsman Michail Mikeschin, who had just completed his studies at the art academy a year earlier . His submitted project consisted of a large number of partial drawings of the individual fragments of the future monument.

Inspired by the unexpected award and the responsible commission, Mikeschin showed remarkable organizational skills and drew many other well-known sculptors of his time, including Wiktor Hartmann , Schreder , Tschischow , Saleman , Opekuschin , Lyubimow and Michailow . For the creation of the monument, government circles and Tsar Alexander II demanded a proper presentation of both the history of Russia and the role of the ruling house of Romanov . In addition, the project reflects the contemporary transition from classicism to realism . While the upper part with the angel and the allegorical personification of Russia still follows the classical style, the lower part is characterized by realistically depicted people.

The Festivities 1862, a painting by Bogdan Willewalde

The monument was opened on September 8, 1862. The preparations for the celebrations had been going on since spring. Novgorod, which until then had been a quiet provincial town, experienced a noticeable revival: thousands of workers appeared everywhere to restore houses and repair the streets and squares. The Novgorod Kremlin was also renewed and restored. An important motivation was the expected visit of Tsar Alexander II to the opening of the monument.

About a week before the celebrations, military units moved into Novgorod to ensure the security of the royal family and to take part in the parade on the opening day. They consisted of the infantry, cavalry and artillery regiments of the guards. About 6,000 soldiers came from Saint Petersburg alone, a total of about 10,000. Grand Duke Nikolai Nikolayevich was appointed as the chief commanding officer . The large number of military personnel was due, among other things, to rumors of a planned assassination attempt on the Tsar. In 1881, Alexander II actually fell victim to an assassination attempt.

The millennium monument in the late 19th century

The festivities began with five artillery volleys from 62 cannons. The invited guests sat on specially constructed stands. The tsar was presented with an artistic album depicting the history of Novgorod. After a cross procession and a liturgy in the St. Sophia Cathedral, a military parade was held in Kremlin Square and the monument was solemnly unveiled. Towards evening the city, which was decorated with flags, was festively illuminated and there were fireworks. There was a street festival for the people with music and entertainment. The festivities lasted a total of three days.

After the October Revolution , in 1925, an order came from Moscow to demolish the “Monument to Orthodoxy and Tsarism”. However, the local authorities decided to "hide" the monument. A construction made of wooden boards was erected around it, on which various revolutionary posters and banners hung. It also served occasionally as a speaking platform at local gatherings. So the monument survived until the beginning of the Great Patriotic War .

On August 15, 1941, Novgorod was occupied by the German Wehrmacht . General von Herzog from the staff of the army that was besieging Leningrad ordered the monument to be dismantled and the individual parts shipped to Germany. In December 1943, the Germans began to saw the monument, but Novgorod was liberated by the Red Army on January 20, 1944 . At this point the monument was a sad sight. The pedestal was absolutely empty except for the lower remains of the orb, the large damaged figures on the middle level were scattered in the snow across the Kremlin Square. The three meter high cross lay bent on the ground. Many details such as swords, sceptres or shields had disappeared without a trace.

Immediately after the city was liberated, it was decided to rebuild the monument quickly. An important role was played by the fact that patriotic and historical models were used in a targeted manner in the course of the war in order to increase the fighting morale of the troops, so that the relationship to the monument changed significantly compared to the pre-war period. The Leningrad Architecture Committee was commissioned with the reconstruction. In the course of the restoration, 1500 missing details had to be remade. The memorial was ready on November 2, 1944 when its second grand opening took place.

The monument is characterized by a multitude of interlinked symbolisms. It is built up like a gigantic orb , which is on a bell-like pedestal . From its outlines ago the monument combines the Cap of Monomakh , the symbol of the autocratic tsar power, with the Novgorod veche bell, the symbol of democratic self-government, an expression of since 1861 onset of liberal reforms. From top to bottom, the monument is divided into three segments or levels, which reflect the national motto widespread in the Russian Empire : Orthodoxy, autocracy, folkism ( Православие, самодержавие, народность ).

On the imperial orb or the upper level are the figures of an angel holding a Christian cross and a kneeling woman who embodies Russia (the country name Rossija is female) and is blessed by the angel. Around the orb, six thematic groups of sculptures with a total of 17 larger figures are set up on the middle level, representing six important stages in Russian history. The imperial orb, which symbolizes the power of the tsar, is covered with an ornament made of crosses, which means the unity of the church and autocracy . In addition, it is adorned with an old Slavic stylized lettering “To the completed millennium of the Russian state in 1862”. In the lower level of the monument there is a frieze in which the reliefs of 109 historical figures of Russia can be found. They represent the Russian society that sustains the tsar's autocratic power. The monument contains a total of 128 human figures.

Figures of the lower level

The figures on the monument had to be personally accredited by Tsar Alexander II during the planning phase. An image of Ivan IV the Terrible is completely missing on the monument . This was done out of consideration for the citizens of Novgorod, as the city had suffered under his rule due to a massacre of the population in 1570. There were strong concerns about the admission of Nicholas I, whose reactionary policies stood in opposition to the liberal policies of Alexander II and led Russia to the defeat of the Crimean War . Ultimately, however, he was included in the list of characters with a view to still numerous circles close to him. Proper ideologically motivated disputes broke out around many of the characters, which particularly affected freethinking and critical authors such as Lermontov, Zhukovsky, Griboyedov and others. Mikeschin only managed to convince the Tsar of the need to take in Nikolai Gogol with difficulty. Antioch Kantemir , on the other hand, fell victim to censorship. Even Taras Shevchenko , who died during the construction phase and came as a supplement in question had to be omitted. Fleet leader Fyodor Ushakov is also missing from the other outstanding personalities .