Little is known about Minin's origins and early years. He originally came from Balachna , where his family probably worked in the salt industry. There are unconfirmed claims that he was a baptized Tatar , originally named Kirisha Minibaev.

In 1610 the Polish King Sigismund III tried . to raise his son Władysław IV. Wasa to the throne of the tsar and to introduce the Catholic faith in Russia. In 1611, the Patriarch of Moscow Hermogenus or the Trinity Monastery of Sergijew Possad sent a call to a number of Russian cities to defend the faith and to resist the Polish / Lithuanian occupation. Kuzma Minin supported this appeal in Nizhny Novgorod and began to raise money and supporters. When sufficient funds were raised, he proposed Prince Posharsky as military leader. He agreed, but demanded that Minin should continue to be responsible for the logistical part of the survey. 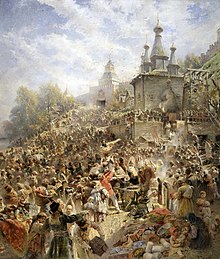 Minin calls on the people to donate

Other cities soon joined them. At the beginning of April 1612, a people's army was formed in Yaroslavl headed by Poscharski and Minin, which first defeated the Polish army under Hetman Chodkiewicz in August 1612 . The following October the Polish garrison in Moscow also had to surrender. In July 1613 Mikhail Romanov was crowned tsar and one day later he raised Minin to the nobility. Minin enjoyed the tsar's confidence. This was also expressed in the fact that in 1615 he was entrusted with the administration of Moscow while the tsar was on a trip to the Trinity Monastery.

He died near Kazan in 1616 during a Tatar- Mari uprising and was buried in the Nizhny Novgorod Kremlin in the Archangel Michael Cathedral .

The Minin and Pozharsky monument on Red Square in front of St. Basil's Cathedral in Moscow commemorates him and the second leader of the uprising .