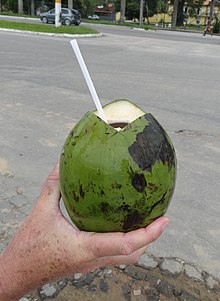 Coconut water as a drink

The liquid content of coconuts is called coconut water , also known as coconut water or coconut juice . This applies to both young coconuts up to 6 months and ripe coconuts (10 to 13 months). In the growing countries, the coconut water from the young fruits is an important substitute for drinking water and is often offered as street food .

The coconut water becomes less with increasing ripeness, but it is not completely consumed until germination. After the harvest, the amount of coconut water contained can be used to estimate how long a nut has been stored. The fresher the nut, the more coconut water it contains.

The coconut is not a nut, but a solitary stone fruit. "Coconut water" was wrongly not classified as a fruit juice for a long time due to the designation as "water" (also in other languages, e.g. English coconut water ) , although the Food and Agriculture Organization of the United Nations (FAO) in the Codex Alimentarius coconuts or coconuts Coconut water led under fruit juices. This changed in 2003 in the USA through a determination by the US authorities. In Europe, the definition at European level was first made by the European Fruit Juice Association (AIJN) in 2016 and 2017. This position was confirmed in 2017 by the ALS for Germany. Since then, the terms coconut water , coconut water and coconut juice can be used synonymously. This has advantages for the consumer, since fruit juices and similar products are subject to the stricter requirements of the German fruit juice and soft drinks regulation (and the corresponding regulations of the EU countries). The addition of sugar, for example, is therefore not permitted.

Traditionally, only coconut water made from young coconuts is drunk in Asia and South America. This is germ-free as long as the nut remains closed and does not contain any fat in young nuts. It does not taste like the typical well-known coconut aroma, it is light in taste - not a heavy juice - and contains many minerals. This makes it the ideal traditional thirst quencher in the tropics and balances out the lost minerals.

Only coconut water from young nuts usually turns pink or even pink after prolonged contact with air. This change in color is called pinking . It is not a sign of poor quality, but an enzymatic process that neither changes nor adversely affects taste or smell.

Under emergency conditions, the sterile and mineral-containing coconut water was used intravenously as an infusion solution for the treatment of volume deficiency shock . In some countries, coconut water is traditionally used to balance diarrhea. Because of the low salt and glucose content, coconut water is not an alternative to the oral rehydration solution recommended by the WHO .

There are numerous studies on the health benefits of coconut water as a food and for use in medicine:

While coconut milk is obtained from the pulp of the coconut, coconut water consists of the liquid content of the nut.

Coconut milk also has different nutrients, for example it has a higher fat content and is richer in calories.