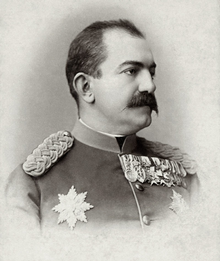 Milan's father was Miloš Obrenović, a nephew of Prince Miloš Obrenović , his mother the Romanian noblewoman Elena Maria Catargiu . Milan's father served as a mercenary in the Romanian army and died in Bucharest in 1861 in a battle against the Turks. After the death of her husband, his mother led a carefree life and left the upbringing of her son to his uncle, Prince Mihailo Obrenović . Milan moved to Kragujevac at the age of six , where he was looked after by educators and governesses. He then attended the Paris Lycée Louis-le-Grand . He was married to Natalija Keško , from whom he divorced in 1888 due to numerous affairs and political differences.

After his uncle Mihailo fell victim to an assassination attempt in 1868, Milan, who was still a minor, was appointed successor to the Serbian princely throne. Until he came of age in 1872, the Prime Minister and leader of the Serbian Liberals Jovan Ristić, as Prince Regent, carried out the duties of the young prince. Ristić retained the reign even after Milan's majority and was finally replaced by the leader of the conservatives , Milutin Garašanin , the son of Ilija Garašanin . Throughout his life, Milan Obrenović was reluctant to take on his role as a constitutional Serbian prince, which brought him into serious conflicts with the country's political elites and ultimately brought about his overthrow.

During Milan's rule, the Serbian principality finally became independent from the Ottoman Empire after successfully participating in the Russo-Turkish War in 1878 and the subsequent Peace of San Stefano , but increasingly became dependent on Austria-Hungary . Although Milan initially leaned on Russia in terms of foreign policy , the unfriendly attitude of Alexander III moved him . on the occasion of a visit to Saint Petersburg in 1881 to seek support from Austria-Hungary. In May and June 1881, Milan concluded a secret agreement with Austria-Hungary without the knowledge and consent of his government , in which Serbia undertook, among other things, not to take any foreign policy steps without the consent of Austria-Hungary and not to allow any propaganda against the Danube monarchy . Critics in the Serbian government perceived the agreement as an undue restriction of the sovereignty through which Serbia had made itself a vassal state of Austria-Hungary. In response to the signing of the agreement, the President of the Council of Ministers, Mihailo Piroćanac , offered the entire government to resign, but Milan refused to accept it.

As a result of the Romanian proclamation of the king in the previous year, the Kingdom of Serbia was proclaimed on March 6, 1882 ; On this occasion, Emperor Franz Joseph I personally congratulated Milan. In Milan's era the first political parties arose in Serbia: the Radical Party under Nikola Pašić (1881), the Liberals under Jovan Ristić, and Milan's own Progressive Party ( Srpska Nepredna stranka ). Milan strengthened the military system in Serbia and forced the conversion of the army from a militia into a standing army . Milan's plans to disarm the people led to the Timokian peasant uprising in 1883 , which was fueled by the radical Pašićs. However, the uprising was put down and Pašić had to flee to Bulgaria for a short time in order not to be executed.

Serbia got into a fierce rivalry with the autonomous principality of Bulgaria , which had been autonomous since 1878 , whose German prince Alexander von Battenberg, with the support of Russia, contested Serbia for rank. When Bulgaria in 1885 with Eastern Rumelia united, Milan saw it as a preparation for a Bulgarian campaign in Macedonia , Bulgaria and declared the war . However, on November 7, 1885, he lost the decisive battle at Slivnitsa against the Bulgarians and narrowly escaped a military disaster that was averted only with the help of Austria-Hungary.

In 1887 supporters of the Radical Party attempted an assassination attempt on Milan. Rather unpopular with the people, he was noticed by the European public by compromising his marriage to the Russian noblewoman Natalija Keško with a few affairs (including Jennie Churchill ). Finally, he divorced in 1888. The marriage with Queen Nathalie resulted in son and heir to the throne Aleksandar Obrenović . After the prince robbery in Wiesbaden, he lived with his father.

The impetus to renounce the throne was a violent conflict of competencies between the king and the elected government in 1889, so that Milan abdicated in March 1889 in favor of his son Aleksandar Obrenović and left Serbia.

After Aleksandars came of age in 1893, Milan, who had returned from abroad, regained power through his support in the officer corps and the growing influence over his son. On July 7, 1899, a member of the Radical Party attempted another assassination attempt on him, whereupon he had the radicals persecuted again. In 1897 Alexander I even appointed him commander in chief of the Serbian army. Milan's high phase was short-lived, however, because when he turned against his son's marriage to the ill repute Draga Maschin, he lost all influence on him in 1900 and had to leave Serbia again.

Milan moved to Vienna, where shortly afterwards he fell ill with severe pneumonia, which, according to the imperial doctors, gave him little chance of survival. Emperor Franz Joseph I gave him a house and instructed the Hungarian Count Eugen Zichy to keep Milan company. Milan I. finally died on February 11, 1901 of the consequences of the illness. His body was transferred to Serbia and buried in Krušedol near Irig .

Commons : Milan I.  - Collection of images, videos and audio files