He came from the House of Karađorđević and was nicknamed Petar Oslobodilac (the liberator). 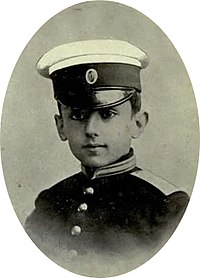 Peter Aleksandrović Karađorđević was born on June 29th jul. / July 11,  1844 greg. born in Belgrade . He was the fifth of a total of ten descendants of the Serbian Prince Aleksandar Karađorđević, who had ruled since 1842, and his wife Persida Nenadović . On his father's side, he was a grandson of the Serbian freedom fighter Karađorđe , the founder of the Karađorđević dynasty .

From a dynastic point of view, Peter initially played a subordinate role. It was not until the early death of his older brother Svetozar that he was considered the legitimate successor to the throne of the semi-autonomous Principality of Serbia from 1847 . 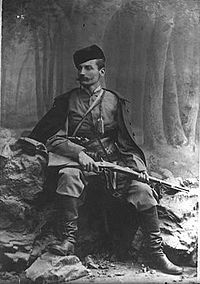 Peter spent his childhood in Belgrade and Topola , his family's hometown. As a result of a domestic political crisis, his father was forced to abdicate in December 1858 in favor of Mihailo Obrenović from the Obrenović dynasty . Aleksandar then went into exile with his family in what was then the Austro-Hungarian Timișoara . Peter was sent to Switzerland to continue his education at the Institute Olivier Venel in Geneva and in September 1861 to graduate from the prestigious Paris Collège Sainte-Barbe . Between 1862 and 1864 he completed an officer training at the Saint-Cyr Military School . Afterwards, Peter lived in Paris for a few months and, in addition to studying political-philosophical literature, which brought him closer to the basic principles of liberalism and parliamentarism, devoted himself to photography and painting . In 1866 he attended the high artillery school in Metz ( École d'application de l'artillerie et du génie ), in 1868 he published a Serbian translation of the work On Liberty by the British philosopher John Stuart Mill .

After the outbreak of the Franco-Prussian War in 1870, he joined the Foreign Legion as a lieutenant under the pseudonym Petar Kara . During the war he took part in the battle of Orléans and the battle at Villersexel . In the spring of 1871 Peter was able to flee from German captivity and join the rebellious Paris Commune .

The continuing tensions on the Balkan Peninsula ( Balkan Crisis ) led to the outbreak of an uprising by the Orthodox population in Bosnia against the Ottoman rule ( Serbian-Ottoman War ). Peter saw in this uprising the possibility of influencing Serbian politics and enabling his dynasty to return to the royal throne. In August 1875 he went to Bosnia and commanded a group of rioters fighting the Ottomans under the code name Petar Mrkonjić . After crossing the border illegally into Austro-Hungarian territory , he was briefly interned in 1878 before he could return to Paris. Because of his activities directed against the House of Obrenović, Peter was sentenced to death in Serbia for high treason in absentia .

By participating in the Bosnian uprising against the Ottomans in 1876 ​​and by marriage to the princely family of Montenegro , Peter tried to increase his political weight, but remained unsuccessful for a long time. Only in the wake of the murder of the Serbian King Aleksandar Obrenović on June 11, 1903 by officers under Dragutin Dimitrijević , who also killed the hated queen and her brothers, the Prime Minister and several officers, did the Serbian National Assembly make a decision under the influence of the Radical People's Party Nikola Pašić to bring Peter back from his exile in Geneva and proclaim him king. The extent to which the pretender to the throne planned or approved the assassination of his predecessor has not been clarified, despite various assumptions - at least for several years there was a blemish on his royal rule in European diplomacy and the public. As king, Peter I initiated liberal reforms, allied himself with Russia and developed relations with France, while at the same time attempting to reduce Austria-Hungary's influence in the Balkans. In 1908, during the Bosnian annexation crisis, he protested vehemently, but unsuccessfully, against the incorporation of Bosnia-Herzegovina into the dual monarchy, since Serbia itself had an interest in this long-Turkish-ruled province. Relations with Austria-Hungary were already strained by the fact that their government had banned the import of Serbian beef in 1906.

Peter’s eldest son, Crown Prince Georg , was the cause of scandals . His right of succession to the throne passed to his younger brother Aleksandar.

If the annexation crisis of 1908/09 had been settled peacefully, as Serbia found no support from its ally Russia for a war against Austria-Hungary, the situation escalated in 1912 over the question of the possession of Macedonia . This year, the European neighbors of the Ottoman Empire, Serbia, Bulgaria , Montenegro and Greece , which united in the Balkans , saw the opportunity to divide up Turkish property in Europe. Peter I was particularly keen to gain access to the Adriatic for his country . After Montenegro declared war on Turkey on October 8, Serbia, along with Bulgaria and Greece, joined this step on October 17. The allies were able to achieve considerable success within a short period of time, whereupon the Ottoman Empire had to request a ceasefire at the end of November when Albania , Sanjak , Kosovo , Macedonia and Thrace were lost and the Turkish troops had to withdraw as far as Istanbul . After the military coup of the Young Turks in early 1913, the fighting flared up again, but Turkey was powerless against the overwhelming power of the Balkan Federation, so that on May 30, 1913, it had to agree to the cession of all areas west of the Enos-Midia line in the London Treaty .

How these areas were to be allocated to the winners, however, was controversial. The great powers Austria-Hungary and Italy did not want to allow Serbia access to the sea and managed to get Albania independent and the south of Macedonia to fall to Greece, while the north mostly came to Serbia. The latter particularly angered Bulgaria , which claimed a historical claim to this area and then attacked Serbia in July 1913 (2nd Balkan War). But now Romania , Montenegro , Greece and even Turkey came to the aid of Peter I. Bulgaria had to ask for an armistice on July 30th; in the peace treaty of Bucharest on August 10, it had to finally recognize the Serbian possession of northern Macedonia.

However, the situation remained tense, especially since Peter I had gained some territory and thus became more threatening for Austria-Hungary, but had not come any closer to his goal of accessing the Adriatic. This goal then seemed to be within reach again in the spring and early summer of 1914 through Russia-sponsored plans for a state union between Serbia and Montenegro.

Allegedly due to illness, Peter I had to hand over the management of the official business to his son Alexander I. Karađorđević as regent just at this time - shortly before the outbreak of the First World War - although he retained the title of king and the son in the July crisis after the murder of The Austrian heir to the throne, Franz Ferdinand, was reinforced in his firm stance towards the Austrian ultimatums through terrorists supported by Serbian circles.

After initial Serbian successes in the defense of Belgrade in 1914, the superior military power of Austria-Hungary in 1915 meant that almost all of Serbia was occupied by Austria and the royal family had to flee to Corfu . The aged King Peter - unlike his former father-in-law Nikola of Montenegro in 1916 - did not abandon his troops, but shared all the hardships of flight, which earned him a high reputation among ordinary people. 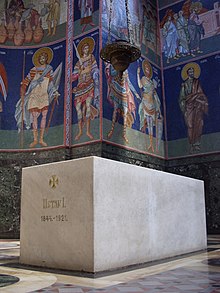 Grave of Peter I in St. George's Church in Topola

With the de facto end of the World War, Crown Prince Alexander resigned his function as regent in December 1918, and King Peter took over the official duties again - now as King of the considerably enlarged Kingdom of Serbs, Croats and Slovenes , since Austria lost the South Slavic territories with the surrender, which merged on December 1, 1918 to form this new state. The internal differences in this state, especially between the Serbs, who wanted a centralized state governed from Belgrade, and Croatians, who wanted a loose federation, became apparent early on, but the seriously ill Peter I, who was already in his mid-seventies, had to leave the task of state integration to his son. He himself died in 1921 and was buried in Topola .

In Cetinje , Montenegro , Peter got married on July 30th . / August 11, 1883 greg. Zorka of Montenegro (1864–1890) from the House of Petrović-Njegoš . The princess was the eldest daughter of Prince Nikola of Montenegro and his wife Milena Vukotić .

Commons : Peter I.  - Collection of images, videos and audio files