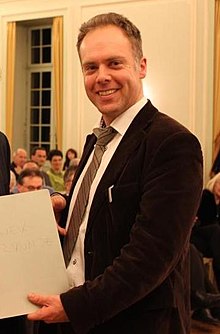 Dominik Geppert at the Wolf-Erich-Kellner-Preis award 2013

Since March 2011, Geppert has been in charge of the edition of the 2012 published diary by Hans Werner Richter in Bonn . In 2013 he and Hans-Peter Schwarz († 2017) edited the "Rhöndorfer Edition" of Konrad Adenauer's letters and diaries . Alongside Eckart Conze , Joachim Scholtyseck , Elke Seefried , Jürgen Frölich and Ewald Grothe, he has been the editor of the yearbook on research on liberalism , which is published on behalf of the Friedrich Naumann Foundation for Freedom , since 2017 . He is also a member of the board of trustees for the award of the Wolf-Erich-Kellner Prize . Geppert has been a full member of the North Rhine-Westphalian Academy of Sciences and the Arts since 2015 and a full member of the Historical Commission of the Bavarian Academy of Sciences since 2017 . Since 2018 he has been President of the Commission for the History of Parliamentarism and Political Parties .