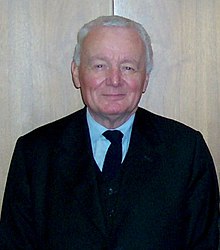 Arnulf Martin Baring (born May 8, 1932 in Dresden ; † March 2, 2019 in Berlin ) was a German lawyer , journalist , political scientist , contemporary historian and author . He was a professor emeritus at the Free University of Berlin and a member of the German-British Baring family .

He was born as the son of the later Senate President at the Federal Administrative Court in Berlin, Martin Baring . Since 1986 he has been married for a second time to Gabriele Baring , née Oettgen, who is now a family therapist and was born in 1954 . Baring was the father of four children, the daughters Juliane and Susanne were from Baring's first marriage, the children Anna and Moritz from his second marriage.

Arnulf Baring attended high school in Berlin-Zehlendorf . From 1943 to 1945 he lived with a grandmother in Dresden; there he barely survived the firestorm that mainly British bombers caused in February 1945 . After graduating from high school, Baring studied law and political science in Hamburg , Berlin , Freiburg im Breisgau , New York, Speyer and Paris . During this time he was a scholarship holder of the Evangelisches Studienwerk Villigst . In 1957 he earned a Masters of Arts from Columbia University . From 1956 to 1958 he was assistant at the Department of political science, Constitutional and Administrative Law of the Free University of Berlin , where he in 1958 based on the dissertation The representative of the public interest in the German administrative process to Dr. jur. received his doctorate .

Then Baring, a former student of Karl August Bettermann , was a lecturer at the German University of Politics . He was a guest at the Fondation nationale des sciences politiques at Paris University from 1960 to 1962. From 1962 to 1964 he was a member of the editorial team (politics) of Westdeutscher Rundfunk (WDR) in Cologne. Between 1966 and 1968 Baring was a research assistant at the Institute for Political Science, Constitutional and Administrative Law and a lecturer at the Otto Suhr Institute of the Free University of Berlin, where he worked according to the old rules before the reform at the Faculty of Economics and Social Sciences in 1968 with a Gilbert Ziebura supervised work on foreign policy in Adenauer chancellor democracy habilitated .

After a one-year research stay at the invitation of Henry Kissinger at the Center for International Affairs at Harvard University , he was appointed full professor of political science, theory and the comparative history of political systems at the Free University of Berlin in autumn 1969 . There he took over the chair for theory and comparative history of political systems of rule at the Otto Suhr Institute. He held this position until he moved to the Chair of Contemporary History and International Relations ( Friedrich Meinecke Institute ) in 1976. From 1972 he was co-editor of the quarterly journal for contemporary history . Since 1998 Baring was retired . Dominik Geppert , Bolko von Oetinger and Wulf Schmiese were among his academic students .

During Walter Scheel's tenure , he worked in the Federal President's office from 1976 to 1979 , where he worked on his bestseller Change of Power , published in 1982 , in which he described the first years of the social-liberal coalition after 1969 and the emergence of the new Ostpolitik . 1983 Baring because he Hans-Dietrich Genscher had supported in the election campaign, from the SPD ruled , whose member he had been since 1,952th Later he was not affiliated with any party; He supported foundations such as the FDP- affiliated Friedrich Naumann Foundation , the CDU- affiliated Konrad Adenauer Foundation and was an ambassador for the New Social Market Economy Initiative .

In the 1990s, Baring became famous with his books Does Germany fail? and Long live the Republic, long live Germany! also known outside of science with liberal and patriotic views. As a university lecturer, he opened his house to many gifted students, some of whom could live with him free of charge. From 1986 to 1988 he was visiting professor at the Foundation for Science and Politics in Ebenhausen, Fellow at the Woodrow Wilson International Center for Scholars in Washington, D. C., and Senior Research Associate at the Institute for East-West Security Studies in New York. 1992/1993 was Baring Member (Member) of the Institute for Advanced Study in Princeton and 1993/1994 Fellow at St Antony's College of Oxford University .

He was committed to coming to terms with the SED dictatorship , and since 2003 he has been a founding member of the Friends of the Berlin-Hohenschönhausen Memorial . He was also a supporter of the Center against Displacements and a member of the advisory board of the Atlantic Initiative .

As a conversation partner, Baring was often a guest on talk shows like Anne Will , hart but fair or Menschen bei Maischberger . In July 2009 Baring gave a festive speech at the German Atomic Forum , for which he was paid by the lobby agency Deekeling Arndt . According to his own confession, he stood up for nuclear power as an “impartial but passionately committed citizen”. When asked, he said that the agency had worked with him beforehand and provided him with information. At that time - also as part of the election campaign for the federal election in September 2009  - there was a campaign to extend the service life of German nuclear power plants . The Frankfurter Allgemeine Zeitung published Baring's speech as an extensive guest article.

Arnulf Baring dealt with current political events in the Federal Republic of Germany throughout his career. He triggered discussions several times.

In 1991, in a published conversation with the publisher Wolf Jobst Siedler , he expressed himself in an undifferentiated disparaging manner about the qualifications of former GDR citizens with a university degree.

“The regime dwarfed people for almost half a century, ruined their education. Everyone should be just a mindless cog in the machine, a mindless helper. Whether someone calls himself a lawyer or an economist, educator, psychologist, sociologist, even a doctor or engineer, it doesn't matter. His knowledge is completely useless for long stretches. [...] many people are no longer usable because of their lack of specialist knowledge. They just haven't learned anything that they could bring to a free market society. "

Early on, in 1997, Baring warned in his book Does Germany fail? before the monetary union of numerous European countries (the introduction of the euro ) and the admission of Greece to the monetary union. He predicted that Germany threatened to be blackmailed financially. In addition, the Germans would be held responsible for the monetary and budgetary discipline imposed on all member states, which would risk them "once again becoming the best-hated people in Europe".

“The monetary union will therefore ultimately amount to a gigantic blackmail maneuver. We will be told: If you want the monetary union to work and Europe does not blow our minds, then we will have to make transfer payments in future. That is why taxes have to be increased and our competitiveness vis-à-vis third countries has to be reduced accordingly. "

Baring saw his forecasts confirmed by the euro crisis that had been going on since 2009 ; he described the monetary union as the biggest wrong decision Germany made after 1945.

In November 2002 the Frankfurter Allgemeine Zeitung published a well-received article entitled Citizens on the Barricades , in which Baring blamed the “frozen party system ” for the weakness in reform in the Federal Republic. This article goes on to say: "We must not let everything go downhill, helpless politicians let the country rot."

In 2003 Baring publicly defended the CDU member of the Bundestag Martin Hohmann , who was supposed to be expelled from the CDU on charges of having given an anti-Semitic speech . In 2006 he signed the “Appeal for Press Freedom” initiated by the weekly newspaper Junge Freiheit against the exclusion of Junge Freiheit from the Leipzig Book Fair .

Also in 2006, an alleged statement by Baring about the Holocaust was criticized. During an appearance at a CDU event, according to a report by the Frankfurter Rundschau on September 9, 2006, he is said to have expressed the opinion that portraying the extermination of the Jews as a “unique and incomparable crime” (cf. singularity debate ) was exaggerated. The SPD and the Greens accused him of relativizing the crimes of National Socialism . Baring denied the allegations; his statement, which was taken from a free speech, had been taken out of context. One tries to put him in the "right-wing conservative corner". The criticized passage read literally and in context as follows:

“Of course it is perfectly clear that the twelve years of Hitler will be with us as long as there are Germans. Even if we ourselves were inclined to draw a line, this twelve-year period will always cling to us. It has been a disaster and the crimes have continued to damage us. But it is just as true that these twelve years and the criminal traits of this time do not make up the whole of our history, that this has been a deplorable derailment, that we basically think back to this phase with sadness, that this is just a past that does not want to pass, that German history does not accumulate in this phase, but that there were centuries of German efficiency and German peacefulness before. [...] This, too, is part of this story that we should acknowledge. "

Baring took the view that there was too much regulation in Germany, and in 2002 described the Federal Republic as "GDR light". The welfare state, as Baring said in television shows and his publications, is far too pronounced in Germany and is causing stagnation in the country. In October 2008, Susanne Gaschke criticized these statements by Baring and other representatives of economic liberalism in the period with a view to the financial crisis from 2007 . According to Gaschke, the neglected behavior of bankers and speculators turned out to be a much greater cause of the crisis. Baring does not condemn the “drone-like ruling class” for mistakes in this regard, but because, in his opinion, they have not dismantled the welfare state sufficiently.

In September 2010, Baring commented on television programs with Frank Plasberg and Anne Will on the discussion about Thilo Sarrazin's book Germany Abolishes itself . After reading "a large part", the work itself appears to him as a "very serious, serious, thoughtful, well-documented essay on a question that we have been putting off for decades". The fact that the Chancellor condemned the book without precise knowledge and urged the Bundesbank to initiate Sarrazin's dismissal finally stated after a few days that the Bundesbank had decided in full sovereignty, Baring described as a "mockery of the Bundesbank" and the citizens as a whole.

Baring, who had previously been a sympathizer of Karl-Theodor zu Guttenberg , criticized him for his plagiarized dissertation and accused him of character deficiencies.