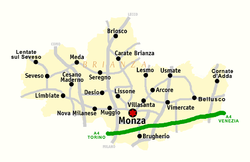 The province of Monza and Brianza (Italian Provincia di Monza e della Brianza , Lombardy Provincia ëd Monza e dla Briansa ) is an Italian province of the Lombardy region . The capital is Monza , the third largest city in Lombardy. The population is 878,267 (as of December 31, 2019). The province is one of those with the highest population density in Italy, alongside the metropolitan provinces of Naples, Milan and Turin.

The province was re-established by resolution of the Italian Senate on May 12, 2004. It initially comprised 50 municipalities that previously belonged to the province of Milan . Five more parishes were legally assigned to her in December 2009.

The provincial president and assembly were first elected on June 6th and 7th, 2009. The provincial coat of arms was chosen by the Provincial Council on October 13, 2011 after a competition announced by the new province in 2011: a design by the designer Lucio Brugiatelli that has been used since then. The coat of arms shows a Celtic triskele with reference to the Celtic root brig (hill) of the landscape name Brianza , it symbolizes the subdivision of the liquid-rich province by its watercourses. The iron crown of the Lombards, which is kept in Monza, is depicted above the coat of arms .

Commons : Province of Monza and Brianza  - Collection of images, videos and audio files

Provinces in the Lombardy region