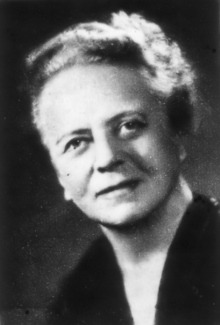 She was one of the first women in Germany to study chemistry. At the Technical University of Berlin she did her doctorate in 1919 on anhydrides of higher aliphatic fatty acids and then initially worked in industry.

Together with her husband Walter Noddack , she then looked for the elements of the atomic numbers 43 and 75, which were still unknown at the time, at the Physikalisch-Technische Reichsanstalt , supported by the X-ray specialist Otto Berg . They discovered element 75 in 1925 and named it rhenium . At the same time they claimed to have discovered element 43 and suggested the name Masurium . It was reported in Popular Science magazine as early as 1925 . The discovery of rhenium was later confirmed and weighable quantities could be isolated. In contrast, their discovery of element number 43 was always controversial. Due to the isobar rule postulated in 1934, it soon became clear that element 43 could only have radioactive isotopes. Element 43 was only believed to have been safely discovered in 1937 and was named technetium . After 1925, no further Noddacks results on Element 43 were published to support the initial claim. Hence the name Masurium was not accepted.

In 1934 she suggested that “when heavy nuclei are bombarded with neutrons, these nuclei disintegrate into several larger fragments”. Since this assumption was in contradiction to the assumptions common at the time about the physics of the atomic nucleus , it received no noteworthy attention. The disintegration of heavy atomic nuclei into lighter elements was considered impossible, and Ida Noddack herself did nothing to scientifically verify her daring speculation. It was not until five years later, on December 17, 1938, that the fission of uranium was discovered by Otto Hahn and his assistant Fritz Straßmann and demonstrated radiochemically. At the end of January 1939 it was theoretically confirmed by Otto Robert Frisch and Lise Meitner . Frisch coined the term nuclear fission (nuclear fission), which was subsequently recognized internationally.

Ida Noddack was nominated several times for the Nobel Prize in Chemistry , but never received it. In 1931 she was the first and so far only woman to receive the Liebig Memorial Medal from the Society of German Chemists together with her husband . In 1937 she was elected a member of the Leopoldina . In 1966 she was awarded the Great Cross of Merit of the Federal Republic of Germany.

She was buried at the side of her husband in Bamberg.

For the 110th birthday of the researcher, a bronze plaque created by the tourist office was unveiled in 2006 at her parents' house (Brüner Landstrasse 301 - 46485 Wesel) in Lackhausen ( today 's location of the company: Henkes-Lack-Union GmbH); There is Ida Noddack Street there. Since the end of 2012, a street in Emden, East Frisia, has also been named after her. There is now an Ida-Noddack-Straße in Ingolstadt and Bamberg as well. The Ida Noddack Comprehensive School , which was founded in 2019 in downtown Wesel, also bears her name.