This article covers the capital of Bahrain. For the exclave of the same name of the Emirate of Ajman see Manama (Ajman) .

Manama (in the background, the island of Muharraq in front ), January 2006

Manama ([ maˈnaːma ], Arabic المنامة, al-Manama ) is the capital of the Kingdom of Bahrain . In 2008, around 155,000 people lived in Manama, around 15 percent of the total population of Bahrain. This makes Manama the largest city in the island state. Together with the directly neighboring cities of Muharraq and al-Hidd to the northeast and some smaller communities, this results in a metropolitan area of ​​almost 300,000 inhabitants.

Manama is located in the north of the island of Bahrain , directly on the Persian Gulf .

Manama was first mentioned in Islamic chronicles in 1345. In 1521 Portuguese sailors took the place and from 1602 it was ruled by Persians . The Arab Al-Khalifa dynasty has ruled since 1783, with brief interruptions .

In 1947 there were serious religious pogroms against the Jewish minority in the city. In today's Bahrain people of different religions are welcome. On Sasa'ah Avenue, in a business district of Manama, the region's only synagogue has been preserved.

Manama was declared a free port in 1958 and the capital of independent Bahrain in 1971.

In 1987 the al-Fatih Mosque opened in the Juffair district as the largest mosque in the country; it offers space for 7,000 believers.

The city's economic base is dominated by the banks . Over 400 institutes are registered in the Manama district. More and more high-rise buildings and office complexes are being built for bank branches and financial service providers , such as the Bahrain Financial Harbor or the World Trade Center. There is also an up-and-coming textile industry that makes use of imported raw materials.

Coming is also the tourism , with seven million visitors - mostly short break from the Arab world - and thus an important economic factor.

In recent years, many new hotels and holiday resorts have emerged , but above all the popular fully air-conditioned malls (Al Ali, Seef, Bahrain, Marina) in and around Manama. The largest is the "City Center Bahrain" brand outlet , which opened in September 2008.

Manama is characterized by its lively and typically Arab old town and a relatively lively nightlife, the intact souq is not yet overcrowded with tourists.

Manama was the capital of Arab culture in 2012 and offered an extensive program that introduces the culture and tradition of the country and the Gulf region.

In 1986 the University of Bahrain was founded in Manama . There are also some branches of foreign universities in the capital. 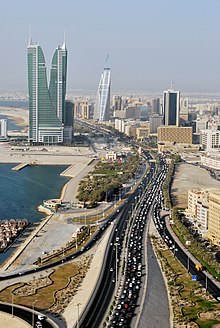 The König-Faisal-Autobahn along the north coast, June 2008

Bahrain International Airport is located on the island of al-Muharraq in the north of Manama .

In the city of al-Hidd on the east coast, the artificial harbor "Hidd Port" (officially "Khalifa bin Salman Port in Hidd") was built far out to sea. It went into operation in March 2009. With its annual capacity of 1.1 million TEU , it is primarily used for container handling . On a heaped area of ​​90 hectares , it offers around five kilometers of quay length plus another 45 hectares of the most modern logistics zone. The new facility is one of the most powerful freight terminals in the Persian Gulf.

Local public transport is still mainly carried by taxis , bus transport consists of only a few private lines that rarely stick to the timetable. This is a consequence of the high density of cars, which is why buses are almost only in demand by poorer migrants. There are plans for real public transport , but the implementation has not yet been decided. Renting a car directly from the airport is widespread among visitors and tourists .

In the financial district is the Pearl Roundabout , in the course of the protests in Bahrain in 2011 was occupied by protesters.

The headquarters of the 5th Fleet of the United States Navy is located in Manama.