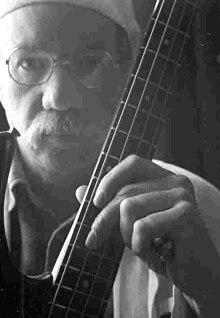 His musical career began in the 1960s in the band Wilde Flowers in the bishopric of Canterbury, in which the later soft machine drummer Robert Wyatt also took part. A local music scene developed around the band that would later become known as Canterbury Sound .

At the time Soft Machine was formed, Hopper had initially signed up as a road manager for the Yameta Organization , an agency that, in addition to the Jimi Hendrix Experience , also signed Soft Machine. With the departure of guitarist and bassist Kevin Ayers , Hopper finally found his way back to active musical life. Frank Zappa , the late Beatles , Jimi Hendrix , but also contemporary electronic music were among his greatest influences at that time . As a bassist and composer, Hopper had a decisive influence on the second Soft Machine album "Volume Two". In addition to keyboardist Mike Ratledge , he was the driving force behind the band on the upcoming albums "Third" and "Fourth". His last album with "Soft Machine" was called "Six".

The instrumentalist and composer Hugh Hopper

The jazz journalist Joachim-Ernst Berendt sees his agile bass playing style together with bassists like Jack Bruce , Eberhard Weber and Chuck Rainey as an important milestone for the virtuosos of fusion jazz like Jaco Pastorius and Percy Jones in the second half of the 1970s. A striking feature of Hopper's playing style is the frequent use of distortion pedals such as the legendary Fuzz Face (known from Jimi Hendrix, among others). Hopper changed his style from short pop songs to more jazzy topics and experiments with tape loops and set pieces of the electronic music avant-garde.

According to Soft Machine

He left Soft Machine in early 1973. Hopper joined Stomu Yamashta's East Wind project and then the Isotope formation, which also included guitarist Gary Boyle , keyboardist Laurence Scott and drummer Nigel Morris. He left the band a year later. Since then Hopper has realized albums under his own name and primarily preferred sporadic band projects, which he reactivated from time to time. In the year he left Soft Machine, he recorded "1984" under his own name, which portrayed the atmosphere of the Orwell novel in gloomy, extravagant soundscapes. The themes from this album and some newer pieces were also featured on the later album "Hopper Tunity Box". The original album in 1984 was added to the list in 1998 "Records That Set the World on Fire (While No One What Listening) 100" by The Wire added.

Some of Hopper's songs have now been covered several times, for example "Memories" (in a version of the funk jazz formation Material with guest singer Whitney Houston ), "A Certain Kind" by the French electro- radio combo Junesex (on their album "So Fucking Chic") from 2004) or "Dedicated To You But You Weren't Listening" by the Keith Tippett Group or Kramer.

1999 formed under the name SoftWhere a band with the line-up Elton Dean, Hugh Hopper, John Marshall and Keith Tippett . In 2002 Keith Tippet left, Allan Holdsworth joined and the band was named Soft Works . After another renaming to Soft Machine Legacy , the band played since autumn 2004 with the line-up of Elton Dean, Hugh Hopper, John Marshall and John Etheridge and released three albums: Live in Zaandam (2005), the studio album Soft Machine Legacy (2006) and Live at the New Morning (2006). After the death of Elton Dean in February 2006, Theo Travis now played . After a European tour in 2006, the new quartet released the album Steam, recorded in Jon Hiseman's studio in 2006, on Moonjune Records in 2007 and before another tour . In addition, Hopper and Elton Dean founded the group "Soft Bounds" in 2003 with Sophia Domancich and Simon Goubert .

Hugh Hopper died of leukemia on June 7, 2009 . The disease had been diagnosed the previous year.