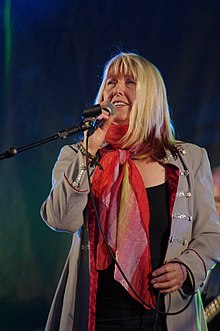 Madelaine Edith "Maddy" Prior (* 14. August 1947 in Blackpool ) is an English folk - singer and co-founder of the folk-rock band Steeleye Span .

Prior grew up in St Albans and was interested in traditional British folk music as a teenager. After meeting singer and guitarist Tim Hart , the two began performing together in 1966 and released the albums Folk Songs of Olde England, Vol. 1 & 2 in 1968 and 1969 . At a folk festival in the same year they met Ashley Hutchings , with whom they formed the band Steeleye Span a little later .

In addition to her work with Steeleye Span, the album Summer Solstice by Prior and Hart was released in 1971 . Prior later married Rick Kemp , Steeleye Span's new bassist who replaced Hutchings and with whom she has daughter Rose Kemp . In 1976 she joined forces with June Tabor to form the folk duo Silly Sisters , which recorded two albums. When Steeleye Span temporarily broke up in 1978, she released her solo debut Woman in the Wings in the same year , for which she was able to win Ian Anderson as a producer. As a guest singer, she appeared on the Jethro Tull album Too Old to Rock 'n' Roll: Too Young to Die! and in 1978 on Mike Oldfields Incantations . In 1979 she accompanied Mike Oldfield on his Exposed tour.

In 1980 she was back at Steeleye Spans Reunion. From the mid-1980s she recorded a number of albums with the Carnival Band , including several productions with traditional Christmas carols. In the 1990s, Maddy Prior focused primarily on her solo work and temporarily left Steeleye Span for two years in 2000.

In 2008 and 2009 Maddy Prior held courses in Stones Barn ( Cumbria , England ) in addition to her performances together with other artists , which particularly deal with the singing and interpretation of English folk songs.

Commons : Maddy Prior  - collection of images, videos and audio files