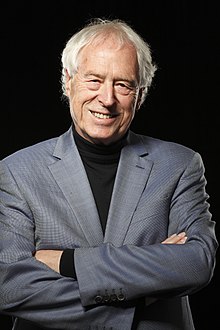 Jürgen Wilfried Falter (born January 22, 1944 in Heppenheim an der Bergstrasse ) is a German political scientist . He held (full) professorships at the University of the Federal Armed Forces in Munich (1973–1983), the Free University of Berlin (1983–1992) and the Johannes Gutenberg University in Mainz (1993–2012). Since 2012 he has been a senior research professor in Mainz. From 2000 to 2003 he was chairman of the German Association for Political Science .

After graduating from high school in 1963, the son of a doctor studied political science, modern history and German studies at the Ruprecht-Karls-Universität Heidelberg and the Free University of Berlin from 1963 to 1968 . After moving to the Otto Suhr Institute in Berlin (diploma in 1968), he turned to electoral research and quantitative social research .

Between 1973 and 1983 he was professor for methodology in social sciences and for political sociology in the pedagogy department at the University of the Federal Armed Forces in Munich . 1977/1978 he was a Kennedy Memorial Research Fellow at the Center for European Studies at Harvard University . 1980/1981 he was visiting professor at the Bologna Center of the Johns Hopkins University in Bologna. In 1981 Falter completed his habilitation under Jürgen Domes at the Faculty of Law and Economics in Saarbrücken on the behavioralism dispute in American political science from 1945 to 1975.

In 1983 Falter took over a full professorship for political science and comparative fascism research at the Free University of Berlin, which he held until 1992. At the Central Institute for Social Science Research there, he was also head of the “Comparative Fascism Research” department. During the same period he taught at the Institute for Fundamentals of Politics. From 1986 to 1988 he had a three-semester academy scholarship from the Volkswagenwerk Foundation and was given leave of absence in Berlin. In 1992 he was Hill Visiting Professor in the Department of Political Science and the Department of Sociology at the University of Minnesota at Minneapolis.

In 1993 he moved to Johannes Gutenberg University Mainz , where he held the Chair of Political Science with a focus on political systems and domestic politics until 2012 . From then on he mainly dealt with political extremism . In the academic year 1999/2000 he was a fellow at the Wissenschaftskolleg zu Berlin . Since 2012 he has headed the senior research professorship on The Members of the NSDAP 1925–1945. A quantitative socio-historical analysis at the Johannes Gutenberg University Mainz. His academic students include Kai Arzheimer , Martin Liepach and Kristina Schröder . Rainer Zitelmann was his research assistant from 1987 to 1992.

From 1991 to 1996 he was a member of the Scientific Advisory Board of the Center for Historical Social Research and the Central Archives for Empirical Social Research at the University of Cologne ; From 1997 to 2002 he was a member of the board of trustees of the Society for Social Science Infrastructure (GESIS). From 1992 to 1995 he was a member of the commission for social and political change in the new federal states. In 1993 he became a board member and 1995/1996 vice dean of the Institute for Political Science in Mainz; From 2005 to 2008 he was Dean of Faculty 2 (Social Sciences, Media and Sport) at the University of Mainz. He has been a corresponding member of the Academy of Sciences and Literature since 2001 and a full member since 2013 . In 2007 he became the chairman of the Gutenberg Research College and the Gutenberg Doctoral College.

Falter, who turned down calls to Geneva (1985) and Bonn (1999), was also involved in the German Association for Political Science (DVPW). From 1994 to 2000 he was deputy chairman and from 2000 to 2003 chairman of the DVPW. He was then a member of the advisory board from 2003 to 2006. For many years he was also the spokesman for the Political Sociology section and head of the working group on elections and political attitudes there. At the end of October 2013, Falter left the DVPW; The background to this is the abolition of the Theodor Eschenburg Prize and the previous discussion about Eschenburg's involvement in the Nazi regime.

He became known to a broader public because radio and television broadcasters frequently invited him to interviews or discussion programs (including Sabine Christiansen ) as an election and party researcher .

In 2005 he was awarded the Cross of Merit on Ribbon of the Federal Republic of Germany.