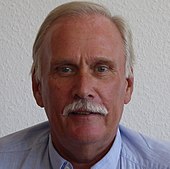 After graduating from high school , he studied political science, modern and contemporary as well as economic and social history and English at the University of Freiburg . From 1970 he received a scholarship from the German National Academic Foundation. In 1973 he was there with Dieter Oberndörfer with the dissertation Armament Dynamics in the International System: Mathematical Reaction Models for Arms Races and the Problems of Their Application to the Dr. phil. doctorate (summa cum laude). After receiving his doctorate, he worked as a research assistant at the doctoral supervisor's chair until 1979 . From 1974 to 1975 he went to Harvard University in Cambridge , Massachusetts (Center for European Studies and Program for Science and International Affairs) as a John F. Kennedy Memorial Fellow . In 1978 he completed his habilitation in political science at the University of Freiburg with a thesis on economic activity and political elections in the Federal Republic of Germany .

In early 1978, he turned down an offer to move to Yale University in New Haven , Connecticut , as an assistant professor . From the 1979/1980 winter semester onwards, he represented a newly created chair for political science at the University of Bamberg; in spring 1982 he was appointed to this. He was Dean of the Faculty of Social and Economic Sciences there for two terms , as well as Dean of Studies and, for many years, Chairman of the Diploma Examination Committee for Political Science and Sociology . He expanded the Bamberg diploma course in political science into one of the leading courses of this kind with a strong empirical-analytical focus. At the turn of the millennium he founded the Bamberg Center for Empirical Studies (BACES), a university research infrastructure that conducts telephone, written and web-based surveys and supports them methodologically and in the evaluation phase.

In autumn 2008 he accepted the position of President of GESIS - Leibniz Institute for Social Sciences and at the same time a chair for Comparative Political Behavioral Research at the University of Mannheim. GESIS was created as a merger of the formerly autonomous social science infrastructure facilities ZUMA (Mannheim), Central Archive for Empirical Social Research (Cologne) and IZ Social Sciences (Bonn and Berlin) and so far has only been managed on an interim basis. Soon after taking office, however, the promises of the responsible ministries of the federal government and the siting states proved to be unreliable to sustainably support the upcoming comprehensive integration task in order to bring these institutions together effectively and to reduce the functional and financial disadvantages of redundancies and location diversity. That is why he ended his presidency of GESIS after a year and a quarter and intensified his research and teaching at the university's chair. In 2015 he retired after the summer semester.

From 1987 to 1988 he was Visiting Professor of German and European Studies at the University of Toronto , and in the following academic year he held the Konrad Adenauer Chair at Georgetown University in Washington, DC . At this university he worked again from 1991 to 1994 within the framework of a "Joint Appointment" with the University of Bamberg as Research Professor of Comparative and International Politics on the establishment of the Center for German and European Studies, founded in 1990. From 1989 to 1990 he was granted an academy year by the Volkswagen Foundation.

Since the late 1970s, he has been continuously soliciting substantial amounts of third-party funding to carry out research projects from the German Research Foundation (DFG), the EU , the Volkswagen Foundation and the Fritz Thyssen Foundation . In terms of methodology, so-called panel studies played a major role in his research projects, i.e. repeated surveys of identical test persons over shorter (e.g. election campaigns) or longer periods (e.g. from one election to the next). Since the Bundestag election in 1990 , he was involved in a large election study for every Bundestag election up to 2013. He is one of the co-founders of the German Society for Election Research (DGfW), of which he was a director for many years. The GLES ( German Longitudinal Election Study ) emerged from initiatives of the DGfW , which initially carried out the world's most comprehensive national election study in Germany since 2009 with funding from the DFG. Until retirement, he was one of the four (later five) “Principal Investigators” with a focus on short and long-term panel studies. In the meantime (2018) the GLES has been taken over into the permanent financing at GESIS.

The main focus of his research has developed over the decades as follows: The dissertation and related publications dealt with the empirical and methodological problems of applying formal modeling to structures and processes in international politics and, related to this, fundamental questions of strategy. For the first time, the simulation studies on the first election to the European Parliament dealt with voter behavior. With the habilitation thesis he worked his way into empirical political economy. During the years as a professor, he mainly carried out attitude and behavioral research, with the continuing interest in international politics being reflected in numerous papers on population attitudes to questions of foreign and security policy. In the narrower field of electoral research, the focus of interest was on voter participation , alternate voting, spatial modeling of voter behavior and, in particular, attitudes towards political parties. In later years, cohort analysis studies on the relationship between demographic and political developments were added. In an international comparison, he mainly worked on population attitudes towards the European Union in the context of projects within the various EU research framework programs.

In addition to over 100 articles in professional journals and edited volumes, his most important book publications are: